Follows are my speech notes from today's "Restore the Fourth" protest in Manhattan.

As we didn't have a PA system these were delivered using the call and response of the "mic check," popularized  by the Occupy Wall Street movement, where the speaker speaks briefly and the crowd repeats his or her words en masse.

We had a good turnout today with 1,000 people braving heat and holiday crowds to march from Union Square to Federal Hall where we read the Fourth Amendment in the shade of the statue of George Washington:


Hello. I'm Tim Karr of Free Press, where we fight for your right to connect and communicate every day.

Free Press is proud to be part of the StopWatchingUS coalition, which has played a big part supporting today's "Restore the Fourth" protests.

I'm wearing red, white and blue as a show of patriotism on this July 4th.

Because protesting against unchecked government power is one of the greatest patriotic acts.

And I'm wearing red, white and blue as a show of support for people like Aaron Swartz, who believed that all knowledge should be open and available to everyone.

And I'm wearing it in support of people like Edward Snowden, who believes that our right to privacy is greater than the NSA's need to spy on us.

And in support of people like Glenn Greenwald, who believes that the role of journalists is to speak truth to power, and not simply cater to the surveillance state.

And I'm wearing red, white and blues as a show of support for the more than half a million people who have joined the StopWatching.Us coalition.

We have called upon Congress to launch an independent committee to investigate the NSA and determine whether the Obama administration has violated our constitutional rights.

Their intrusion into our private lives is a problem that will not be solved behind close doors.

We must fight together to shed light on the abuses of the surveillance state.

And the only way to do that is by raising our voices at protest events like this, by defending our rights and by Restoring the Fourth.

And here's a photo from the end of the protest, after marching more than 30 blocks down Broadway to Federal Hall on Wall Street: 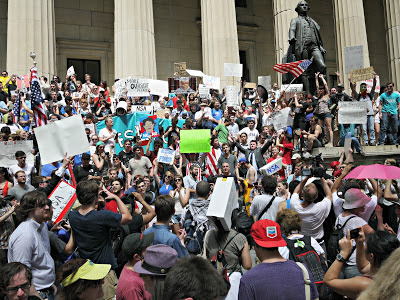