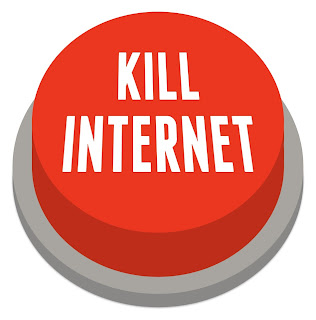 Is the Internet on life support?

Last week we learned that U.S. and British intelligence agencies have broken the back of digital encryption — the coded technology hundreds of millions of Internet users rely on to keep their communications private.

Over the weekend, Der Spiegel reported that the NSA and its British counterpart are also hacking into smartphones to monitor our daily lives in ways that wouldn’t have been possible before the age of the iPhone.

This news, just the latest revelations from the files of Edward Snowden, only heighten our sense that we can no longer assume anything we say or do online is secure.

But that’s not all. In a case that was heard in a U.S. federal appeals court on Monday, telecommunications colossus Verizon is arguing that it has the First Amendment right to block and censor Internet users. (That’s right. Verizon is claiming that, as a corporation, it has the free speech right to silence the online expression of everybody else.)

It's come to this. Government and corporate forces have joined to chip away at two pillars of the open Internet: the control of our personal data and our right to connect and communicate without censorship or interference.

The Surveillance Industrial Complex
A series of reports coordinated among the Guardian, the New York Times and ProPublica revealed that the NSA and its British counterpart have secretly unlocked encryption technologies used by popular online services, including Google, Facebook and Microsoft.

Using National Security Letters and other secret court orders, intelligence agencies can wedge their way onto the large telecommunications networks that move most of the world’s Internet traffic. Getting access to the data is only half the challenge. To read and sort these communications, the NSA works with a lesser-known assortment of security vendors that filter through mountains of data, target references and patterns of interest and crack codes designed to safeguard user identity and content.

Many of the companies that ply this trade are only now being exposed through “Spyfiles,” collaboration among WikiLeaks, Corporate Watch and Privacy International designed to shed light on the multibillion-dollar industry. According to the latest documents provided by Edward Snowden, U.S. intelligence agencies alone spend $250 million each year to use these companies’ commercial security products for mass surveillance.

It’s part of a sprawling complex of companies, lobbyists and government officials seeking to rewire the Internet in ways that wrest control over content away from Internet users.

While motivations may differ, the result is the same: a communications network that works against the Interests of many for the benefit of the few.

Tearing the Fabric
The Internet wasn’t meant to be like this. Bruce Schneier, an encryption fellow at Harvard's Berkman Center for Internet and Society, writes that the NSA and the companies it works with are “undermining the very fabric of the Internet.”

Telecommunications companies are doing their part by giving spy agencies access to our data. They’re also bankrolling a multimillion-dollar lobbying effort to destroy Net Neutrality — the one rule that prohibits Internet service providers from blocking or degrading our ability to connect to one another, share information and use the online services of our choosing.

If Verizon wins its case in Washington, ISPs will be able to prioritize certain online content while degrading user access to sites and services that the big companies don’t like.

It’s a business that puts at risk the most integral function of the World Wide Web. Sir Tim Berners-Lee, the Web’s pioneer, saw the network as a “blank canvas” — upon which anyone could contribute, communicate and innovate without permission.

Berners-Lee’s invention relied on an open protocol that gave everyday users power over the network. This networking principle has far-reaching political implications, favoring systems that are more decentralized and democratic.

Without safeguards that protect users from surveillance and censorship, the Internet’s DNA will change in ways that no longer foster openness, free expression and innovation.

Media Policy
If we’ve learned anything during the Summer of Snowden, it’s that corporations and governments alone can’t be trusted to be good stewards of the Internet. We need media policies that protect our privacy and promote access to open networks.

The fight for these policies is being led by a diverse and bipartisan alliance of civil liberties and communications-rights organizations, including the ACLU, EFF, Free Press and Public Knowledge.

We’re not alone. Millions joined the call for Net Neutrality in 2010; millions more stood up to defend the Internet against the PIPA and SOPA Web-censorship bills in 2012. The battle to protect users’ privacy has engaged new audiences as we've learned more about the extent of the NSA's mass surveillance.

In each of these arenas, we’re working to stop bad laws, amend others and implement new policies that put Internet users first.

A grassroots movement is fueling this fight. If you haven’t joined us yet, now’s the time to step up and save the Internet.
Posted by Tim