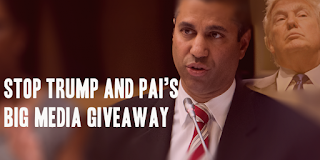 As soon as journalists began asking questions about Duterte’s deplorable human-rights record, security shooed them from the room. Duterte pointed at the departing reporters and said, “Guys, you are the spies.” This elicited a laugh from President Trump, who feels a kinship with anyone who opposes a truth-seeking press. According to Human Rights Watch, at least 177 journalists have been killed in the Philippines since 1986, making it one of the deadliest countries to be a reporter. Of these, nearly half were targeted for their coverage of politics, corruption, crime and human rights, according to the Committee to Protect Journalists.
Here at home, there’s been a worrying uptick in attacks on journalists since Trump became president. The Press Freedom Tracker, a project of a large coalition of media-rights groups including Free Press, documents the dozens of arrests and assaults on journalists in the last 10 months.The link to Trump isn’t coincidental. He’s sucked up much of the oxygen of his presidency discrediting any journalism that challenges his grip on power or rattles his fragile ego. Reporters figure alongside Hillary Clinton and Barack Obama as go-to scapegoats for anything that ails this bumbling administration. For Trump, a functioning Fourth Estate is the “enemy of the American people.” Trump’s attacks on a democratic media are often impulsive, playing out on Twitter in the early morning hours or during his direct encounters with journalists. Media outlets on the receiving end of Trump’s critique, including CNN, the New York Times, the Washington Post and NBC News, have devoted airtime and column inches to defend their reporters and the work they do every day.Undoing Media DemocracyBut while Trump is attacking reporters on the front lines, he’s quietly granting massive favors to any giant media company that’s willing to toe the administration line. His lead henchman on this front, Federal Communications Commission Chairman Ajit Pai, has operated more discreetly to restructure media policy to suit a handful of news conglomeratesPai has scheduled an agency vote for this Thursday to undo several of the media-ownership limits that currently prevent one company from controlling too much media in a single market.

Pai also wants to give the FCC’s full blessing to broadcasting arrangements known as joint sales agreements, which allow a broadcast company to run the news operations of multiple stations in a single area that would otherwise compete against each other.The one corporation that stands to benefit most from this wholesale rollback of ownership limits is the right-wing Sinclair Broadcast Group, which is seeking FCC approval of its proposed $3.9 billion merger with Tribune Media — a deal that would create a broadcast giant controlling more than 233 local-TV stations reaching 72 percent of the U.S. population.   Propaganda Goes LocalSinclair routinely orders its local affiliates to run segments featuring its chief political analyst Boris Epshteyn, a loyal former Trump aide who’s brought the president’s agenda to the public airwaves. Back in June,  for example, Epshteyn praised the White House for phasing out on-camera press briefings, suggesting without explanation that people are much better off for it.

In another he slammed CNN for its “constant coverage [of] the Trump-Russia narrative,” adding that other cable-news networks were “struggling to stick to the facts.”Just last week, Sinclair deployed a reporter from its Alabama station, WBMA, to attack the credibility of the Washington Post article detailing Republican Senate candidate Roy Moore’s alleged sexual assault on a 14-year-old. The Sinclair reporter claims to have spoken with “a lot of voters” in Alabama who all say they don’t believe the Post article.

“Out of all the voters we spoke with Friday in Columbiana, we didn’t find one voter who believed the Washington Post report about Moore,” the WBMA reporter told viewers.

The segment, however, featured interviews with just three voters. A more scientific poll conducted by JMC Analytics found that 38 percent of Alabamians were less likely to vote for Moore as a result of the Post’s revelations. In a recent Op-Ed for the New York Times, Pai wrote that removing ownership limits will clear the path for better local journalism. That’s true only if you consider Sinclair’s product to be better, local, or actual journalism. It’s none of these.

The company specializes in syndicated news content it can produce cheaply in a central studio and ship out to affiliates across the country. Its ongoing efforts to consolidate stations under a single owner has led to fewer journalists at individual stations and less local reporting. And its attempts at journalism often resemble propaganda, typified by must-run commentaries that parrot the Trump line.  Pai plans to move on Thursday to remove these final obstacles to Sinclair’s merger. But he won’t stop there. The First Amendment and the Internet Pai is also making good on Trump’s 2014 attack against Net Neutrality. At the time, Trump claimed in an incoherent tweet that the principle that protects the open internet from blocking and censorship was itself a form of censorship that would “target conservative media.” This isn’t even remotely true. Net Neutrality does just the opposite: It ensures that neither the company that sells you internet access nor the government can block speech.

But that hasn’t stopped Pai, who has long opposed open-internet safeguards. In his first public-policy speech as FCC chairman, he launched a proceeding to unwind the Obama-era Net Neutrality protections. He’s charged ahead despite millions of comments from Democrats and Republicans alike urging the chairman to preserve Net Neutrality. An FCC vote on Pai’s plan to destroy the open internet could happen as early as Dec. 14. His proposal would erase the essential online protection that allows reporters to gather and disseminate information without fear of interference from entrenched internet service providers like AT&T, Comcast and Verizon. From the country’s founding, U.S. laws and leaders have been charged with protecting our right to diverse, open and democratic media, acknowledging the fundamental need for speech that’s free of government and corporate interference.Net Neutrality protections extend these principles to the online world. Because of this, dozens of the world’s leading press-freedom groups have endorsed Net Neutrality and called on the FCC to protect the open internet. They’ve also urged Pai to take a forceful stance on behalf of the First Amendment and renounce President Trump’s frequent attacks on the media. But Pai has only offered a weak response, saying he believes in the First Amendment while demonstrating no desire to act on behalf of those it’s designed to protect. He’d rather devote his tenure at the FCC to enabling the Trump administration’s assault on a free press.
Posted by Tim