How We’re Getting Net Neutrality Back 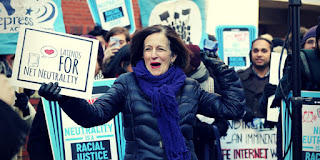 A year ago today, the Federal Communications Commission under Chairman Ajit Pai made one of the worst, most abnormal decisions in the agency’s history.

It ignored public consensus and voted to strip away the Commission’s authority to protect internet users from companies like AT&T, Comcast and Verizon that want to block, throttle or de-prioritize the online content people want to see.

The Pai FCC justified that decision with the bogus claim that the strong open-internet rules adopted in 2015 were hurting broadband investment and speeds. Powered solely by these lies, Pai ripped up not just the nondiscrimination rights embodied in the Net Neutrality rules, but the entire legal foundation for the FCC to promote broadband deployment, affordability and privacy.

At the time, then-Commissioner Mignon Clyburn said that “the public can plainly see that a soon-to-be-toothless FCC is handing the keys to the internet — the internet, one of the most remarkable, empowering, enabling inventions of our lifetime — over to a handful of multibillion-dollar corporations.”

And that public, alongside several advocacy groups like Free Press that support an open internet, has not been silent in the year since. Alongside a new crop of pro-Net Neutrality lawmakers, we’re confident that this year without Net Neutrality has been an aberration — and that the days of Chairman Pai’s assault on the open internet are numbered.

New champions in Congress
In 2018, Net Neutrality advocates mobilized a record number of elected officials to our side. Nowhere was this more evident than on Capitol Hill, where a bipartisan majority in the Senate passed a resolution in May to restore the open-internet rules.

That resolution is still gathering support in the House, where 181 members have pledged to sign a discharge petition to bring it to a full floor vote in the last few days of the congressional session ending this month. That’s short of the 218 required to move the petition forward, but we’ve never had this many members of Congress signal such strong support for Net Neutrality.

Add to that existing support a remarkable class of representatives who will enter the House in 2019, and there’s every reason for optimism. Among the new members are several outspoken supporters of open-internet protections who campaigned on the issue and won.

New champions in city halls
In response to the outcry against Pai’s repeal, more than 125 U.S. mayors signed on to a pledge requiring all internet providers that do business with participating cities to adhere to strong Net Neutrality principles.

Signers include the mayors of Austin, Baltimore, Birmingham, Boise, Columbus, Kansas City, Minneapolis, New York, Newark, both Portlands, St. Louis, San Antonio and San Francisco. Together these cities have a population of more than 30 million people.

New champions in state legislatures
Right away it became clear that the only people who support Pai’s action are industry lobbyists in Washington, D.C., and the politicians who are beholden to them.

But the people of Washington State were living a different reality. Washington was among the first of 37 states to put forth legislation or resolutions rejecting the FCC decision and reinstating Net Neutrality rules at the state level. Protections were soon signed into law by California, Oregon, Vermont and Washington.

Meanwhile, the governors of six states signed executive orders requiring companies wishing to contract with the states to confirm that they would adhere to the 2015 Net Neutrality standards.

The court case continues
The Pai FCC will also have to defend its repeal and abdication of authority in court. Free Press and our allies are challenging the agency’s reversal on the proper definition of broadband, its flawed justifications for tossing out the rules and the many procedural fouls that plagued the FCC’s action last year.

The lawsuit is in the U.S. Court of Appeals for the D.C. Circuit, with oral arguments scheduled for February 1. Pai and his Republican colleagues will have to defend their phony rationale for destroying the open-internet protections and putting nothing in their place.

The FCC is under investigation
The FCC chairman is stonewalling an ongoing investigation to identify just who was behind the millions of fake comments that plagued the agency’s Net Neutrality proceeding. Pai has gone the extra yard to impede inquiries by reporters, researchers and state attorneys general seeking data about suspicious commenters from the agency’s docket.

Witnessing his level of obstruction from the inside, Commissioner Jessica Rosenworcel asked the obvious question: “What is the FCC hiding?”

As the FBI has also taken up the investigation, it will be increasingly difficult for Pai to help shield the culprits or excuse his agency’s negligence and possible complicity in the plot.

Bipartisan support everywhere
Here’s what we do know: When you discount the millions of fake comments, the record at the FCC shows overwhelming public opposition to Pai’s decision to repeal the Net Neutrality protections. This is reflected in national polling that shows strong bipartisan support for these safeguards.

According to a 2018 University of Maryland poll, 82 percent of Republicans, 90 percent of Democrats and 85 percent of independents opposed Pai’s decision to take away our right to choose where we go, what we do and whom we connect with online. This near-consensus is reflected in other polls as well, removing any doubt that people will support any politician, regardless of party, who sides with them in support of Net Neutrality.

That’s because people understand what’s at stake. Without Net Neutrality, large phone and cable companies will take control of the stories we tell, deciding who gets a voice and who doesn’t.

It’s why we’re confident that open-internet supporters will win in the end. And that victory will come sooner rather than later.
Posted by Tim