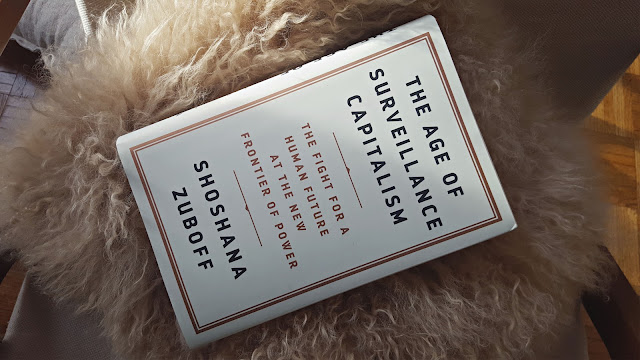 Worse, surveillance capitalism has foreclosed on the promise of a digitally connected world and put something far more sinister in its place. “Our hopes and dreams for the digital future, our sense of empowering and democratizing the digital future, this dream is slipping away,” Zuboff explains, hijacked by an economic model that is taking over our lives both online and off.

Emergency Response
Zuboff traces surveillance capitalism’s inception to a “moment of emergency” in Silicon Valley after the bursting of the dot-com bubble. To respond to the emergency Google decided to “suspend its principles.” It combined the company’s user-search data logs with their leading-edge computational capabilities and used the result to predict human behavior online and off.

This information was then sold to advertisers, which in a relatively short time transformed the advertising marketplace to one that traded on predictive human futures. The companies that had collected the most data on our online likes, dislikes, habits and history were the winners. “They spun it into gold,” Swisher says.

“Right now, surveillance capitalists sit on a huge asymmetry of knowledge,” Zuboff says. “They have a concentration of knowledge unlike anything ever seen in human history. We have an institutional disfiguring of these huge asymmetries of knowledge and power which are antithetical to democracy.”

This is just the latest and most pernicious manifestation of the “shareholder-value maximization paradigm,” Zuboff says, which has excluded massive swaths of the global workforce in its relentless drive for profits and market value. “That paradigm has scraped the life out of so many of our institutions and businesses.”

As much as anywhere, the negative impacts of surveillance capitalism are felt in journalism.

Scraping the Life from Journalism
As Facebook and Google dominate more and more of the online world, the independent and local journalism that people need to engage in constructive dialogue and participate fully in our democracy continues to disappear from communities.

Since 2004 (the year Facebook launched), about 20 percent of U.S. newspapers have stopped printing, leaving nearly 200,000 newsroom employees without work and at least 900 communities without anyone covering local news.

Without a radical new rethink of new media economics, we’re likely to see waves of newsroom layoffs continue through 2019 and beyond — further weakening journalists’ ability to protect the vulnerable and hold the powerful to account.

For journalists it’s been a perfect storm. In the vortex of this we see the world’s wealthiest companies getting rich from a system that hastens the spread of propaganda and misinformation. And it’s happening at a time when the journalism we most need to debunk these lies and hold those who spread them to account is in crisis.

Many once thought the internet would help fulfill the central purpose of journalism, to speak truth to power. But that window of promise for the internet was only open for a short while, says Zuboff. “The promise of empowerment and democratization was real for a few years … but that began to turn once surveillance capitalism was discovered.”

Inflection Point
The economics of the advertising industry are about to reach an inflection point: New eMarketer estimates show US advertisers will spend more than $129 billion on digital advertising in 2019 — more than the $109 billion they plan to spend on broadcast and print advertising that once sustained traditional journalism.

And digital advertising is dominated by just two companies. You guessed it: Google and Facebook control nearly 70 percent of U.S. online ad revenues.

“Right now surveillance capitalism dominates and if we don’t stop it, it’s going to define the moral milieu and the culture and the nature of 21st-century society,” Zuboff tells Swisher. “And right now what that looks like is an extremely unequal society.”

“It’s not only economic inequality, but knowledge inequality,” she adds. Consider that at a time when the news outlets that are tasked with addressing this inequality — by providing knowledge to the people — are in distress.

Zuboff calls for new forms of collective action — people coming together to create power to balance capital. She also calls for “the opportunity for competitive solutions” that “provide an alternative trajectory for a digital future; the kind of place we wanted in the first place. The kind of place we can call home.” A place where the knowledge and tools are for us.

I don’t believe we can get there unless we find a better economic model for journalism. The answer may lie in a redistribution of the wealth created by surveillance capitalism — away from properties that are harming democracy toward ones that serve the public good.
Posted by Tim

If you are facing any problem related to Avast software package on your system or device, feel free to Contact Avast Support Phone Number for benefit. We provide Support for Avast through either live chat or Avast Helpline Phone Number &improve your any Avast issues whether it is related to installation, setup or configuration. They will gain remote access of your computer with your permission. Technician will contribute your information on how to improve the problem and run antivirus program so that spyware, malware and viruses can be detached. You just help to dial our Avast Customer Service Numbers 1-844-665-8111 (USA).

As a leading home appliance service provider, SathiClap gives best-in-class on-demand AC repair service in Patna. We are a well-experienced professionals expert which is always to provide the best services to the customers. All you need to do is dial our contact number and this can help you to get high-quality services. We also offer 24/7 Service to all of our customers. You can always count on Sathiclap Service Experts to get to you fast and get the job done right the first time.