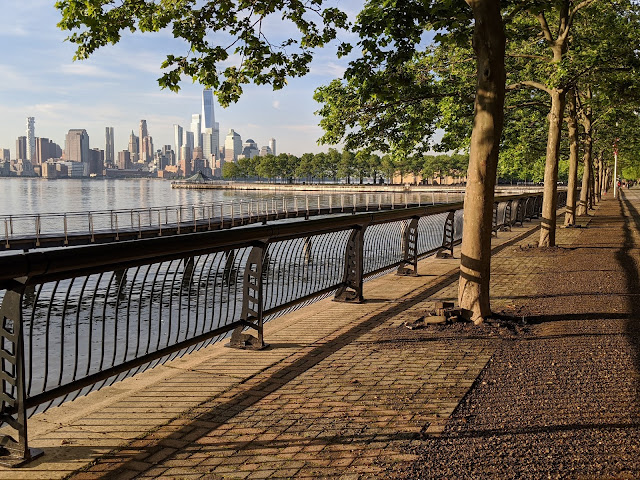 Twitter, Instagram, Facebook and other platforms have been flooded with video clips of piles of bricks on sidewalks suggesting some clandestine scheme to fan the flames of violence and disrupt constitutionally protected protests.

President Trump has conveniently laid the blame at the feet of Antifa, a loose collection of black-clad provocateurs whom he seeks to classify as “domestic terrorists.” Others have suggested that the bricks may be part of the “Boogaloo,” an effort by white supremacists to provoke the next civil war, pitting Blacks against whites in America.

Many of these video clips have been effectively debunked by fact-checkers and journalists. In most cases, the bricks are simply part of a nearby construction or repaving project. In one bogus video created and spread by the White House, the stones in question were actually an anti-ramming barricade erected more than a year ago by a Jewish Community Center in California.

Infecting Hoboken
Sadly, this misleading online meme has spread to Hoboken. There are a number of tweets linking the Friday demonstration to mysterious piles of bricks, which allegedly were deposited under the cover of night at locations along the route of the march. I'm purposefully not linking to them here.

In all of the instances I’ve seen, the photos are of bricks that aren’t at Hoboken locations. Oftentimes, the twitter accounts posting this disinformation were recently created and have few followers (tell-tale signs of a troll, bot, or other online agitator). The owners of the accounts refused to identify themselves to me or say that they were from Hoboken.

The concern is already seeping through our community. One former Hoboken politician (Yes you, Tony) attempted to sow fear with a tweet warning of widespread vandalism and chaos should Mayor Ravi Bhalla and local police not shut down all means for outsiders to enter our city. Wiser minds have prevailed, apparently, as he's since deleted this alarmist tweet.

A number of Hoboken restaurants and shops have started boarding their windows. Expect to see more doing this today as fear spreads to other owners who rightly don’t want to become victims of vandalism, but whose (over?)reaction still feels shameful.

In search of Hoboken's mystery bricks
I decided this morning to take a walk to the demonstration site at Maxwell Park. From there, I walked the route along Sinatra Drive to Pier A that the protest organizers said they’d be following. (See my interview with the organizers here).

My goal was to find and photograph mysterious piles of bricks that have been left along the way. As you might expect, there were none.

I did find some random rocks, deposited at the foot of the Stevens Institute cliffs by that greatest professional anarchist of them all, Mother Nature.

I also found some paving stones on a pallet at Pier A, part of a city-permitted project to repave a portion of the walkway between 4th Street and the pier.

I contacted the contractor and asked whether the bricks were placed there for some purpose other than beautifying our city. At first, he thought I was joking. After some convincing, he assured me that beautification is indeed what they were intended for.

You see, we do have bricks in Hoboken we also have mortar. They are the people who look out for the welfare of one another. We hold ourselves together during times like these. We protect the rights of everyone — to be free from fear when speaking out, assembling and demanding justice for all.

We should reject anyone seeking to take away those rights or to frighten us into taking action against people expressing their concerns about systemic racism and police violence. Those spreading false information in order to pit people in conflict with one another need to be called out repeatedly.

On Friday, Hoboken has the opportunity to come together in solidarity with the Movement for Black Lives. We should join together at Maxwell Park in a socially-distant show of strength and support for one another and for those who may be less fortunate than we are.

Please join us. Yes, wear a mask. And don’t let fear or its mongers win the day.
Posted by Tim

If you are facing any problem related to Avast software package on your system or device, feel free to Contact Avast Support Phone Number for benefit. We provide Support for Avast through either live chat or Avast Helpline Phone Number &improve your any Avast issues whether it is related to installation, setup or configuration. They will gain remote access of your computer with your permission. Technician will contribute your information on how to improve the problem and run antivirus program so that spyware, malware and viruses can be detached. You just help to dial our Avast Customer Service Numbers 1-844-665-8111 (USA).

SathiClap is the best platform for all electronics service in Patna city. Here are the list of services like Electronic Repairs, Appliance service, washingmachine , AC, laptop,RO and much more services. We provide you to the best and highest level quality of services to repair electronics device. Just book our service and get quick response,our technician is arrive at your doorstep.

Here you will find the Top India Classifieds websites list. These websites provide free advertisements for selling and buying items, real estate, jobs and many more.

Are you interested to activate USTVNow channel on Roku?

Here we explain the activation steps. USTVNow.com/Roku, this is the page to activate the channel. If Roku is your device, select the best device among Roku Express, Express Plus, premiere, and premiere plus. Collect the activation code and provide the code visiting the activation page. For help and support to activate USTVNow channel, contact our team of network support executives right away
If the channel activation is complete, pick the top USTVNow channel networks such as ABC, CBS, CW, FOX, NBC, PBS, A&E, Animal Planet, Bravo, Cartoon Network and a lot more.If you need more details about activating USTVNow on Roku you can call +1-805-436-1200 our technical assistance will guide you or you can visit USTVNow.com/Roku

Activation of Roku Device
Firstly switch on the Roku TV and the streaming device.
Connect the device to your internet connection.
Launch the TV screen
Roku
com link Activation Code, once it appears on the screen after launching must be noted down.
The code consists of a URL. It is often known as Roku my account link.
Open the link in the browser to activate the Roku device.
Enter the com link activation code and login.
After login, enter the com link activation code to finally activate the Roku device.
You can also add or remove channels online using your Roku account. Roku users have to pay one time for any channel purchase. You can pay online using a credit or debit card.
Problems while using Roku
Some common problems that you might face while using Roku can be as follows:
The Internet connection can be one hurdle while using a Roku device.
In case your TV is not upgraded it will be difficult to use the Roku device. You must upgrade your TV to use the device properly.
Internet server issues can disrupt the network.
In case your network is not secure that can lead to virus attacks or system failure.

Roku TV activate is the best service in the USA, Do you have an issue with your Roku Device? Get instant solution and support by Roku Helpline Number.
hbo max
hbo max roku
hbo max on roku
roku tv disney plus
disney plus on roku
how to get disney plus roku

How to Resolve my HP Officejet Pro 6968 Printing Black Pages?

Are you stuck in the middle while printing on your HP Officejet 6968? Is your printer printing back pages abnormally? This guide explains how-to instantly fix all of those issues in a jiffy. You can adjust the print preferences under “Printer settings” by enabling the “Print on Both Sides Manually” option. Still no luck in fixing the printer? Do not worry. Our tech-savvies are here to resolve all of your concerns. Contact our Customer Support Team right away to speak with a technical professional to troubleshoot HP Officejet Pro 6968 and fix all your printer problems in the blink of an eye.

Glute Bands are the key to a deep booty workout. We understand the importance, so we focus predominantly on designing the high-quality resistance band for glute. visit here: