Tucker Carson's Racism: Paid for by You 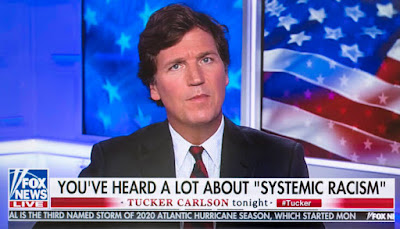 Racism pays in America — especially if you’re the primetime host of a cable channel that panders to the country’s sizable population of white nationalists.

Fox News struck bigotry gold when it offered its 8 p.m. time slot to Tucker Carlson, who returned the favor by routinely fanning the flames of hatred against immigrants, Muslim and Jewish people, Black and Brown people, the LGBTQIA+ community and anyone else he considers threats to his supremacist world view.

While Tucker Carlson Tonight is among Fox News’ most-watched shows, it’s not his viewers alone who pay Carlson’s $10-million salary. Nor is it advertisers who’ve left the program in droves, refusing to have their products featured adjacent to Carlson’s bile.

Carlson’s enormous paycheck comes out of the pockets of millions of people who never watch his show or anything else on Fox. And there’s very little they can do to customize their cable so it excludes media properties owned by the Murdoch family.

Earlier this week, investigative journalist Judd Legum wrote about this dilemma: While the vast majority of cable-TV subscribers don’t watch Fox News, all of them pay on average $1.72 a month to receive it as part of the standard bundle of channels offered by the likes of Comcast, Spectrum and Verizon. When you lump in Fox Corporation’s other cable properties, including Fox Business News, FS1 and FS2, this monthly payout exceeds $2 per subscriber.

For those keeping count, that’s $1.6 billion in 2020 revenue for Fox News alone — about 57 percent of the station’s total revenue.

It’s a good question. Unfortunately, the answer isn’t as simple as it should be.

Hate-free bundles?
Legum suggests that cable companies could simply offer a package of cable channels that excludes Fox News — something I’ve referred to previously as a “hate-free bundle.” Subscribers could opt to exclude other purveyors of hate and disinformation (think One America and Newsmax). Pay-TV providers in turn would negotiate Fox carriage fees that are much lower than the wildly excessive amounts these companies now pay the Murdochs.

Muhlenberg College Media and Communications Professor John Sullivan says such an offering is common in stock trading, where “you can choose a ‘socially responsible’ mutual fund to avoid investing in stocks that include oil companies or do business with questionable regimes around the world.”

Why can’t we do the same with the cable channels we pay to receive? Subscribers could shave a couple of bucks off their monthly bills by refusing to help line Carlson’s pockets or fund the Murdochs’ hate-for-profit business model.

It’s not for lack of trying. In 2015, Verizon attempted to break the bundle by offering a discounted “skinny” package, with its FIOS customers selecting 10–17 channels in addition to must-carry local channels and public outlets.

Subsidizing fascism
Following the Jan. 6 insurrection, Reps. Anna Eshoo and Jerry McNerney of California sent letters to each of the dominant pay-TV services asking why they were doing nothing in response to the hate and disinformation aired by some of their standard offerings of cable channels.

The lawmakers asked whether and why each service planned to continue carrying Fox News, Newsmax and One America News when they revisited carriage-fee negotiations with the owners of these outlets.

Until companies like AT&T, Comcast, Spectrum and Verizon step up to break the bundle — or we see policy changes favoring consumer “a la carte” — cutting the cord is the only option for those who don’t want a cent of their monthly bills to subsidize hate and disinformation.

But that isn’t easy. Some who’ve chosen to cut the cord and receive TV “over the top” — via their high-speed internet connection — have customized their viewing options to exclude Fox News. But many of the over-the-top streaming options on offer by pay-TV providers bundle in Fox News; many of these options don’t offer a la carte.

Regardless, the vast majority of people in the United States still opt for cable or satellite TV; cord-cutters are in the minority.

Until they’re given more choice, viewers in the United States need to be clear with the companies that sell them their pay-TV bundles: Paying the Murdochs for content is the modern-day equivalent of subsidizing fascism. “No rhetorical wiggle room should be allowed,” writes Oliver Willis of Media Matters for America.

Long term, we need a serious reckoning with how we got the media system we have, where commercial media collude to push white-supremacist content that harms Black and Brown communities.

We must repair the damage done and rebuild more diverse and democratic media. We can start by turning off the cable cash spigot that fuels big-media bigotry.
Posted by Tim