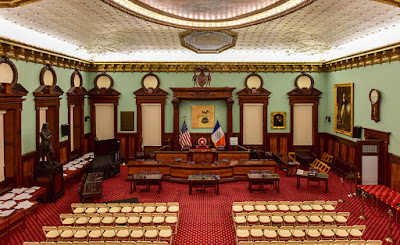 Hello. My Name is Timothy Karr and I’m the senior director of strategy for Free Press. At Free Press we fight for everyone’s rights to connect and communicate, which includes advocating for policies that promote universal access to an affordable and open internet.

As such, we often cross swords with the Federal Communications Commission. And we’ve been particularly busy during the Trump administration. President Trump appointed as FCC chairman a person who’s devoted his career to handing telecommunications giants special favors at the expense of the people he’s supposed to be serving.

Many of you may be familiar with Chairman Ajit Pai for his efforts to take away our rights to an open network. His agency’s recent decision to repeal Net Neutrality protections will go down as one of the most wrongheaded, dishonest and unpopular rulings in the history of the FCC. My organization will soon be filing a legal challenge in the U.S. Court of Appeals against that FCC action.

But Pai has done other bad things. Things that are particularly harmful to poor people in New York City.

On his first day on the job, Pai pledged to close the broadband divide and “bring the benefits of the digital age to all Americans.” This would be his administration’s top priority, Pai said.

He then did just the opposite, launching a plan to dismantle the Lifeline program, which subsidizes phone and internet access to families struggling to make ends meet.

Pai then launched a proceeding in which he proposed several cutbacks and budget caps. One cap for the whole program could arbitrarily limit overall Lifeline program participation or slash funding to fully eligible recipients. Another  would cap the length of time or the amount of support individual recipients can receive in their lifetime, arbitrarily cutting off funding for the most vulnerable users such as elderly people and people with disabilities.

But that’s not all.

Chairman Pai has also proposed kicking “non-facilities-based providers” out of the program. Free Press research has found that these communications providers — also called “resellers” because don’t own their own networks, but lease capacity from companies like Sprint and T-Mobile  —  provide services to more than 70 percent of Lifeline subscribers nationwide.

In total, Pai’s proposals would eviscerate the Lifeline program. The harms to struggling families in New York City would be particularly glaring.

As I mentioned earlier, Spot On Networks received eligible provider status from the Obama FCC to serve public-housing units in New York Housing Authority buildings in Queens. Before Chairman Pai ripped away that eligible status, Spot On was poised to offer a Lifeline service that delivered a 20 megabits per second download and upload speed connection with unlimited data, using fixed wireless technology (like Wi-Fi). Unlike Lifeline service on a single smartphone, such a service would have enabled all members of a single household to go online at the same time, which is a significant benefit for families with children needing to complete their homework.

If Chairman Pai’s Lifeline proposal is approved, however, there will be only one wireless provider left serving the entire metropolitan area — Assurance. Since the other two, Access and Safelink, are resellers, they would be denied provider status, according to Pai’s changes.

Chairman Pai’s actions against Spot On have already robbed low-income New Yorkers of high-quality affordable options. But he’s not done. With the current proposal Pai’s gearing up to deny struggling New Yorkers the ability to choose a broadband provider that best fits their limited budgets.

The program’s purpose is to ensure that poor people have the benefits that communications services enable, including the ability to pursue employment opportunities, stay in touch with loved ones, and access education and emergency services.

The Trump FCC’s Lifeline plan, if adopted, would leave millions of people without such essential options. That's why Free Press and hundreds of other organizations, including the AARP, the NAACP, the National Association of American Veterans and the U.S. Conference of Catholic Bishops, have asked Chairman Pai to abandon his cruel proposal.

I hope New Yorkers will also stand with us and against this FCC’s war on the poor.

webroot install SecureAnywhere AntiVirus's new approach delivers faster, more effective virus protection that's always up to date. Also identifies and protects against new threats as soon as they emerge - without ever having to download security updates. Scans PCs with blazing fast speed and won't let enter any threat to enter in your pc.