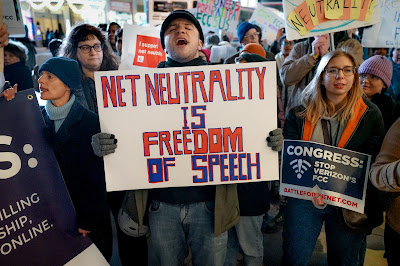 But how did we get to where we are today, and what can people do to stop the Trump administration and big phone and cable companies from killing Net Neutrality? Here’s the rundown:

How did we lose Net Neutrality?

We won Net Neutrality protections in 2015 after a decade-long battle to determine whether internet users or the companies that sell online access would control the internet.

A 2015 FCC ruling created the legal foundation for real Net Neutrality, giving internet users the right to choose what they do, where they go and who they connect with online.

This victory was an unprecedented win for the public interest against the forces of an immensely powerful corporate lobby that had spent hundreds of millions of dollars on lawyers, PR firms, lobbyists and campaign contributions in a failed bid to take over the internet.

But in 2017 Donald Trump swooped in to save the swamp. He put in place a new FCC chairman — former Verizon lawyer Ajit Pai — who from day one declared his intention to do the bidding of phone and cable companies and repeal the historic 2015 rules.

Pai pushed through this ruling despite the flood of support from tens of millions of people who favored keeping the Net Neutrality protections.

Pai continues to declare that his ruling was based on proof that Net Neutrality rules had hobbled investment and innovation — and yet he’s failed to produce a shred of evidence to support these claims. That’s because none exists.

How do we plan to win it back?

From the day of the 2017 vote to repeal Net Neutrality, open-internet advocates have fought to restore our rights.

Free Press and our allies are taking the FCC to court, challenging its reversal on the proper definition of broadband, its flawed justifications for tossing out the rules, and the many process fouls that plagued the FCC’s 2017 proceeding.

Since then we’ve worked tirelessly to build our case against the legal, factual and moral failings that the FCC majority used to prop up its unjustified decision.

The suit has been assigned to the U.S. Court of Appeals for the District of Columbia, with oral arguments expected to occur by the end of the year. We’re confident that the judges reviewing the Trump FCC’s wrongheaded decision will rule against its conclusions and the way Pai conducted the proceeding.

Meanwhile, members of the House and Senate have introduced a resolution of disapproval under the Congressional Review Act, which would overturn the FCC decision and restore the Net Neutrality rules. The resolution — led in the Senate by Sen. Ed Markey (D–Massachusetts) and in the House by Rep. Mike Doyle (D–Pennsylvania) — has gained hundreds of co-sponsors.

Throughout the year, members of Team Internet — a campaign run by Free Press Action Fund, Demand Progress and Fight for the Future — have been rallying outside the local offices of lawmakers to gain support for the resolution.

In addition, more than 30 states are weighing legislation to restore the Net Neutrality rules. Governors from the states of Hawaii, Montana, New Jersey, New York, Rhode Island and Vermont have signed executive orders prohibiting their states from doing any business with internet providers that violate Net Neutrality.

The mayors of more than 110 cities, representing more than 25 million people, have signed a similar pledge.

What can I do today?

In early May, the three groups leading Team Internet — which are also behind the organizing hub BattlefortheNet.com — announced “Red Alert for Net Neutrality,” a series of actions to drive constituent calls and emails to lawmakers ahead of the imminent Senate vote on the resolution reinstating the open-internet safeguards. The groups are launching the days of action in the expectation that the Senate will soon vote on Markey’s resolution.

In the days following May 9 and leading up to the Senate vote, internet activists, major web companies, online forums and small businesses will “go red” for Net Neutrality, displaying banners on their websites and via social media, urging everyone to take action by telling their senators to vote for the resolution.

You can get involved by visiting BattlefortheNet.com or Free Press, or by joining Team Internet.

All 49 members of the Senate Democratic Caucus, as well as Republican Susan Collins, have announced their support for the resolution, meaning that, at most, just one more vote is needed to ensure passage in the Senate. If the measure passes there, activists will ramp up the fight in the House, where about 160 reps have signed on to a companion bill.

Congress has the opportunity to rewind the Trump FCC’s terrible and unpopular decision. You can get your members of Congress to stand up for real Net Neutrality — and to stand on the right side of history — by urging them to vote for the resolution of disapproval.

Tens of millions of people have joined the fight for Net Neutrality. If we don’t raise the alarm now we could lose the one principle that keeps the internet open and available to everyone.
Posted by Tim

Unknown said...
This comment has been removed by a blog administrator.
7:43 AM

tushar soni said...
This comment has been removed by a blog administrator.
2:33 AM

Welcome to www.avg-retail.xyz Protect your data, devices, and your family With the development of the digital world, online protection is crucial. It is extremely important to protect your PCs, Mac, computers as well as mobile devices and tablets with avg.com/retail. This can be done with the help of effective internet security and anti-virus products from avg.com/retail that safeguards all devices used on digital platforms.

When you buy a new HP printer, you try to connect it using the user manual. The manual provided by the 123.hp.com/setup manufacturer may not be in detail. Hence, our technical experts have given simple instructions that guide you through the HP Printer setup and troubleshooting issues if any.

What an awesome post, I just read it from start to end. Learned something new after a long time. May be you interested to know about AT&T customer service phone number full time AT&T Support?

AOL gold comes with a feature that can secure your computer files from different types of malicious attacks if you are browsing the internet. AOL has become very easy to use on computer. you can download AOL gold from AOL gold download.

Well explained and informative blog.
We at QuickBooks Support Phone Number USA 1-855-600-4060 committed to support the QuickBooks users as the top-most priority. Our experts are available round the clock to solve users' problems.