The fight for Net Neutrality took a big step forward on Monday with the chair of the Federal Communications Commission announcing plans to expand the rules to protect a free and open Internet.

In a speech at the Brookings Institution, Julius Genachowski said the FCC must be a "smart cop on the beat” preserving Net Neutrality against increased efforts by providers to block services and applications over both wired and wireless connections.

Genachowski’s speech comes as a breath of fresh air in a Washington policy environment that has long stagnated under the influence of a powerful phone and cable lobby.

“If we wait too long to preserve a free and open Internet, it will be too late,” Genachowski said citing a number of recent examples where network providers have acted as gatekeepers:

A Call for Wired and Wireless Neutrality

The agency has earlier noted concerns about the blocking of applications and services on new handheld Internet devices such as the iPhone.

Genachowski, who was an architect of President Obama’s technology agenda, proposed that the agency adopt new principles that would prevent discrimination and require full transparency from ISPs that seek to manage their networks. The new principles are additions to the “Four Freedoms” endorsed by the FCC in 2005.

Genachowski asked the FCC to adopt all six principles as Internet rules that are “essential to ensuring its continued openness.” FCC Commissioners Michael Copps and Mignon Clyburn have already indicated they support stronger Net Neutrality rules.

“The rise of serious challenges to the free and open Internet puts us at a crossroads,” Genachowski said. “We could see the Internet’s doors shut to entrepreneurs, the spirit of innovation stifled, a full and free flow of information compromised. Or we could take steps to preserve Internet openness, helping ensure a future of opportunity, innovation, and a vibrant marketplace of ideas.”

In a panel of experts following the speech, David Young of Verizon Communications stated that his company is able to “live with” Internet openness standards. “Openness and innovation are keys to our success,” Young said, but added predictably that he prefers a “hands off approach.”

Young later added a familiar lobbyist refrain that he "doesn't understand what the problem is that we are trying to solve" with openness rules. Verizon has already deployed 194 lobbyists at a cost of more than $13 million this year to fight Net Neutrality both at the FCC and in Congress.

"The Internet is inevitably going to have a regulatory structure around it," Free Press Policy Director Ben Scott said in response to Young. "What we're deciding is: What is it going to look like?"

“What we heard today is a very common-sense approach,” Scott said. “But in this town, doing something common sense is considered bold.”

“[This is] about fair rules of the road for companies that control access to the Internet,” Genachowski concluded. “We will do as much as we need to do, and no more, to ensure that the Internet remains an unfettered platform for competition, creativity, and entrepreneurial activity.”

The FCC Opens Its Doors

Now the FCC has to actually write the new rules and invite comments from the public and interested parties.

To engage more public participation in the process, Genachowski announced that the agency would hold a series of public workshops on openness. In addition, the FCC launched a new Web site, www.openinternet.gov, so the public can “contribute to the process.”
Posted by Tim No comments:

What Beck, Dobbs and Limbaugh Are Really Afraid of

Can you smell the fear? Switch on cable news or tune in to talk radio and it comes wafting in.

Fox News Channel's Glenn Beck has bottled his own scent. Lou Dobbs' fear gives off a distinct undertone of racial intolerance. And Rush Limbaugh takes to the air to spread an odor that's designed to make Americans angry at, well, other Americans.

It's a fear that's laced with paranoia, stoked by misinformation and prejudice and fed to millions of people via powerful media. But most of all, it's a fear of the changes that an overwhelming majority of Americans called for when they stepped into voting booths last November.

Since then, the old guard has fallen into alignment with old media to hijack the public debate over reform, and vilify reformers as anti-American. And to them the most anti-American notion of the lot is the idea that we need to reform the media itself.

"Part of the strategy of this fundamental 'transformation' of America is to silence dissent," Glenn Beck said on Fox last month. The "most diabolical, hidden parts of this plan," according to Beck, are efforts to reform media through "localism and diversity" -- two principles that have grounded modern communications policy for decades.

Beck was later joined on the program by Rush Limbaugh, who called localism and diversity part of the growing tyranny of the left. This issue is "simply un-American," Limbaugh crowed. "They're trying to do this back-door route with diversity... to shut you up by shutting us down."

The cloud of media hysteria could have been waved off by more sensible voices on cable's evening news roster. But few have stepped forward to challenge Beck, Limbaugh and Dobbs, to replace their fomenting with facts. More worrisome, voices of reason seem to be absent from the media "pundocracy" altogether.

While Beck and his ilk want to portray diversity and localism as a dangerous conspiracy to censor, the fact remains that these ideas have been staples of communications policy since the beginning. The central mandate of the Federal Communications Commission -- as enshrined in the Communications Act of 1934 -- is to promote localism, diversity and competition in the media. This same principle of localism has been a rallying cry for several generations of true conservatives.

Broadcasters get hundreds of billions of dollars' worth of subsidies and the right to use our airwaves in exchange for a basic commitment to be responsive to the interests of local communities.

Moreover, the Supreme Court recognized that "safeguarding the public's right to receive a diversity of views and information over the airwaves is ... an integral component of the FCC's mission."

Sadly, the FCC has failed to live up to this standard. And what mainstream media's fear-merchants are most afraid of is not censorship, but an FCC that actually does its job -- creating more opportunities for people like you and me to participate in media.

We don't have that now. Washington bureaucrats have allowed powerful media corporations to control the public airwaves and dominate local cable networks. We have reached a nadir where the free press that Thomas Jefferson hoped would open "all the avenues to truth" has devolved into a media system that's a megaphone for the few.

Beck and Limbaugh, in particular, are two corporate welfare babies who owe much of their existence to this regulatory failure, which handed control of our airwaves to massive conglomerates like Clear Channel and ABC Radio to broadcast their fear agenda via a syndicated network of centrally owned radio stations.

The cable sector that carries Beck and Dobbs' nightly paranoia is itself a gigantic bundle of government handouts, having built invaluable local monopolies via granted rights-of-way that beam these two into nearly every den in America.

Try calculating what it would cost to get your content across America without a local or federal government clearing your path, and you quickly realize that blowhards like Beck, Dobbs and Limbaugh are three of the nation's biggest beneficiaries of public largesse.

And while they're raking in millions in salaries via their government-granted fiefdoms, you, the owner of the airwaves and roads and telephone poles over which they transmit, are getting nothing in exchange.

The ultimate irony of Beck, Dobbs and Limbaugh is that they couch in populist rhetoric a message that, in its very essence, is anti-populist -- designed to protect the swindle at the core of our media system's failure.

And that is why the media's old guard is targeting the idea that this system needs to change.

In his media and technology agenda, President Obama took up the cause of reform by committing to "diversity in the ownership of broadcast media," and pledging to "promote the development of new media outlets for expression of diverse viewpoints."

Obama is right, but he needs to get started on fulfilling that commitment.

Winning real change and giving more people a media voice is ultimately the best response we have to fear campaigns.
Posted by Tim No comments:

Click on the image below to begin your roadside tour of telco talking points. 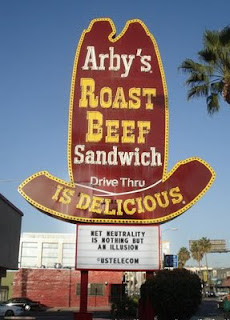 Follow this link to reveal the money behind the Astroturf spin.
Posted by Tim No comments: