When it Comes to Political Ads, No News Is Good for Local TV Stations

The political ad invasion is upon us. It's a toxic mix of half truths and negativity that's beaming into homes across the country, but especially homes in battleground states like Florida, North Carolina, Ohio, Virginia and Wisconsin.

Media analysts project campaigns, Super PACs and often shadowy "social welfare" groups will spend a record-breaking $3.3 billion to buy up airtime as they attempt to influence voters before Nov. 6.

For the local stations that air these ads, it's a political goldmine. But what's a cash windfall for stations has become a nuisance for tens of millions of viewers who will have to endure thousands more political ads before Election Day (mercifully) arrives.

Some Occupy Wall Street portraits from the year that was. My focus in this work is to capture individuals within a crowd... to put a human face to large-scale democratic protests. This work is ongoing (click on images to enlarge): 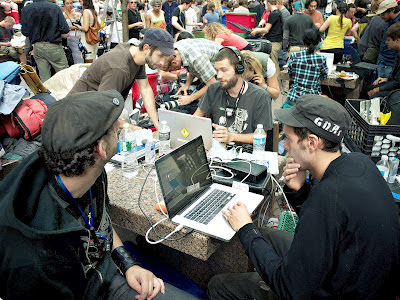