It's fair to say that media and the public have responded with disgust to news that FCC Commissioner Meredith Atwell Baker had cut short her public duties to lobby for Comcast, the company whose takeover of NBC Universal she had just approved.

Baker's Comcast dash raised the eyebrows of even the most seasoned Beltway insiders -- including those who tend to see public-sector service as the farm league for "K" Street jobs.

But the criticism hasn't been limited to one bureaucrat's shameless decision to abandon her 2009 oath to serve the American people. Baker's move may become the tipping point for new rules to stop Washington's revolving door from tempting any bureaucrat to exchange a light regulatory hand for the promise of a high-salaried job.

The New York Times has called on Congress to pass stronger measures to prevent government employees from jumping ship so soon; more than 55,000 people have already written the chair of the House Oversight Committee demanding action.

Can you blame people for being so angry? With public trust in government at a 30-year low, its time Washington recognized that "business as usual" isn't good enough.

Follows is a survey of prevailing opinion:

The Philadelphia Inquirer, May 14:

"There's something particularly unsettling about a regulatory official who voted only four months ago to approve the $13.75 billion merger of Comcast and NBCUniversal turning around to take a high-profile job with that firm... [T]he move threatens to further undermine public confidence in the government's ability to make objective decisions that put ordinary citizens' interests first."

"The revolving door has spun in exactly the way that people outside the beltway have long feared it would. And it happened without any rules being broken. Baker may not have known that NBC-Universal or Comcast would be offering her a job when she argued on their behalf. But everyone in town knows that if you stand up for wealthy interests while serving the public interest, chances are there is a nice fat paycheck waiting for you somewhere when you choose to leave government."

"Unseemly does not begin to describe Baker's actions. Even the most jaundiced critic of the FCC should be taken aback by the Republican commissioner's new job and the blink of time between her vote and her announcement. Factor in the time consumed by the hiring process, which apparently began last month, and it's even worse. It is actions like Baker's that turn people against government."

"Congress should expand the definition of lobbying beyond face-to-face encounters to any effort to influence government decisions for their clients. It should also set tight caps on what former officials, including former lawmakers, can earn from lobbying before they must register as lobbyists. Americans don't need any more reasons to mistrust Washington."

"Rarely are revolving-door stories this revolting. Just months ago Meredith Attwell Baker voted -- as a commissioner on the FCC -- to approve Comcast's controversial merger NBC Universal. Baker is now taking a job as a senior vice president in Comcast's lobbying shop in Washington. 'No wonder the public is so nauseated by business as usual in Washington,' said Craig Aaron, chief executive of media watchdog Free Press."

"The revolving door between the public-private sector is now so taken for granted that FCC Chairman Julius Genachowski applauded the move... 'I wish her well in her new role at NBC Universal,' Genachowski said in a statement, hours after Baker announced she was 'privileged to have had the opportunity to serve the country.' What's more revolting, Baker's move or Genachowski's reaction? Let us know."

One More Washington Regulator Cashes in at Your Expense

Federal Communications Commissioner Meredith Atwell Baker will reportedly depart the agency in June to occupy a corner office at Comcast-NBC -- the company whose multi-billion mega-merger she approved just months ago.

In so doing she joins a long line of "public servants" who have spun government jobs into gold at the expense of the American people they're supposed to represent.

Many have found the FCC to be a particularly lucrative launching pad. Former FCC Chairman Michael Powell now earns millions as the top lobbyist for the National Cable and Telecommunications Association, a trade group that lobbies for the industry he was tasked to regulate.

Commissioner Baker's move to Comcast comes less than four months after she voted to approve the cable giant's takeover of NBC Universal. As recently as March, she gave a speech lamenting that the agency's review of the Comcast-NBC deal "took too long."

"What we didn't know then was that she was in such a rush to start picking out the drapes in her new corner office," Free Press President and CEO Craig Aaron said in a statement after news of Baker's new job broke.

With behavior like this it's little wonder that American people are so nauseated by business as usual in Washington. Inside the Beltway, the complete capture of government by industry barely raises any eyebrows. Outside of Washington, people of every political stripe have expressed near unanimous contempt for a system of government that favors powerful corporations at the expense of the many.

A Pew Research Center aggregate poll finds public trust in government to have reached a 30-year low, dipping beneath 20 percent. With shameless moves like Baker's it's surprising that trust is that high.

The continuously revolving door at the FCC and across all DC agencies continues to erode any prospects for common-sense public policy... the kind that's supposed to promote the general welfare and not simply line the pockets of DC careerists.

Let's hope that her replacement will be someone who is not just greasing the skids for their next industry job. (Don't hold your breath).

Coincidentally, this news came on the same day that another massive corporation was working the halls of Capitol Hill for approval of its merger.

A Wednesday Senate subcommittee hearing on AT&T's proposed takeover of T-Mobile had CEO Randall Stephenson glad handing members of Congress and the FCC for approval of a deal many inside Washington see as inevitable despite a growing public outcry.

The outcry is well justified. As GigaOM's Stacey Higginbotham detailed, there is very good reason to believe that regulators are ill prepared to conceive of the impact the AT&T merger would have on everyday cellphone users. They're working from an old playbook, one where Beltway manipulators like AT&T's team of lobbyists know how to work the refs.

But DC isn't worried about doing right, right now. The head of the company that makes more political contributions than any other -- and spends tens of millions on lobbyists each year -- has graced our capital with his presence.

The only question on the minds of many is how to press a resume into Stephenson's hands before he wraps his visit and returns to AT&T headquarters.
Posted by Tim No comments:

Throw Your Smartphone down the Rabbit Hole

Do you believe in fairy tales?

AT&T wants you to. The phone giant is trying to make everyone believe that its takeover of T-Mobile would be good for jobs, innovation and the economy, while saving you hundreds of dollars on your smartphone.

The opposite is true. But that didn't stop AT&T from making these claims in a 381-page FCC filing that was so filled with half-truths and fantasies that the Los Angeles Times said it came from Alice in Wonderland.

"The wireless marketplace will be more competitive," AT&T claims in the filing. For those keeping score, the phone company is actually saying that consumers will gain more choice among mobile phone carriers by subtracting T-Mobile from your options. 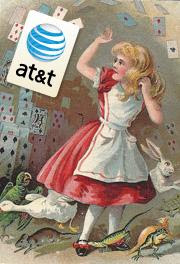 Gobbling up T-Mobile’s 34 million users and absorbing their workforce will "create new jobs and economic growth," AT&T adds. Never mind the tens of thousands of T-Mobile technicians, customer-service reps and storefront salespeople to be “made redundant” soon after the deal goes through.

Such AT&T mythmaking is part of its shameless campaign to convince Washington that the takeover of T-Mobile would be harmless.

It's now left to Congress, the FCC and the Department of Justice to sort fact from fiction and decide whether the runaway consolidation of America's mobile phone sector is in the interest of the American people.

AT&T has already hired an army of lobbyists to make its case. Next Wednesday, they're marching before the Senate Antitrust Subcommittee to woo support for this disastrous deal from our elected officials – many of whom receive handsome campaign contributions from… that’s right… AT&T.

The Los Angeles Times is not alone in its appraisal of the deal. The word from Wall Street to Main Street is that allowing such runaway consolidation of the mobile sector is pure craziness. T-Mobile customers, who stand to have AT&T jack up their rates more than 20 percent are already raising a stink at the FCC, which recently opened a docket for the public to comment on the proposed merger.

The truth is that consolidation of the scale being proposed by AT&T resembles the old railroad and oil trusts of the 19th century. It seems unthinkable to suggest that turning one of the economy’s most innovative and important sectors into Standard Oil would be good for any of us. But that's pretty much how AT&T adds things up.

And with tens of millions of Americans relying on smarter iPhones, Android systems and Blackberry's to do what we want to do, go where we want to go, and say what we want to say, the impact of this merger would be felt dearly.

So should it be left to Washington and one exceedingly powerful company to decide the fate of our communications? (If you're thinking "no," you can help stop this merger by contacting the members of the Antitrust Subcommittee and urging them to grill AT&T next Wednesday.)

If Congress, the FCC and Department of Justice hear from enough people like you and me, they can muster the courage to ask the right questions of AT&T.

Next Wednesday's hearing on the Hill is our first chance to expose this merger for the nightmare that it is, and save our smartphones from following AT&T down the rabbit hole.
Posted by Tim No comments: