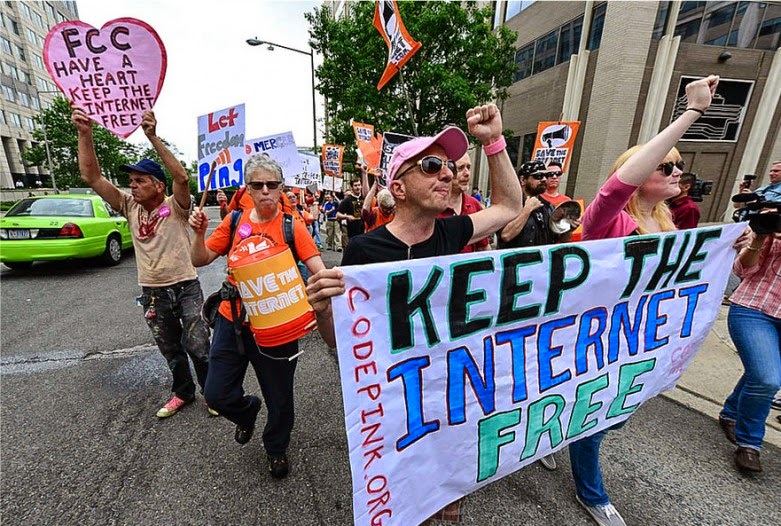 AT&T wants to spend nearly $49 billion to buy DirecTV. If you throw in DirecTV's debt, this deal would cost AT&T a whopping $67 billion. Earlier this year, Comcast proposed a merger with Time Warner Cable that would cost the company a total of about $70 billion.

For the enormous amount of money AT&T and Comcast are shelling out for their respective mega mergers, they could deploy super-fast gigabit-fiber Internet services to every single home in America. But these companies don't care about providing better and faster services, or connecting more Americans to the Internet.

These mergers are about eliminating the last shred of competition in a communications sector that's already dominated by too few players.... (Read the full commentary at USA Today)


Posted by Timothy Karr No comments:

The Make or Break Moment for the Internet

On Thursday, the Federal Communications Commission cast a vote that could reshape the future of the Internet. They decided to proceed with a proposal that if implemented would let Internet service providers charge content companies for priority treatment, relegating other content to a slower tier of service.

At stake is Net Neutrality – the fundamental principle that ensures that when you go online you can read, watch or download whatever you want without your phone or cable company deciding which sites will work the fastest (or not at all).

Net Neutrality is a big part of what has made the Internet an unrivaled space for free speech and economic innovation. We want to keep it that way... (Read the article at MSNBC.com)
Posted by Timothy Karr No comments:


Posted by Timothy Karr No comments:

Breaking the Cycle of Internet Repression

“If you want to liberate a society,” said Egyptian Arab Spring activist Wael Ghonim, “just give them the Internet.”

In retrospect, Ghonim should have qualified his statement to include the kind of Internet free societies need. For as online tools have become standard issue for protest movements worldwide, governments have heightened efforts to remake digital networks as a means of censorship and surveillance.

Today, the optimism about free speech and the Internet that emerged during Egypt’s 2011 uprising has been dashed by the Morsi and Sisi regimes, which have silenced online and traditional media and imprisoned dozens of journalists.