Chairman Genachowski. Can You Hear Us Now?

News last week that Google and Verizon's had reached consensus on a "legislative framework" for Net Neutrality was met with near universal disdain. Not only was the deal slammed by those inside and outside of Washington, it cratered from Wall Street to Silicon Valley.

The criticism didn't end with the Google-Verizon announcement. It extended to the F.C.C. and its indecisive chairman, Julius Genachowski, who seems content to take a back seat to industry as companies like AT&T, Verizon and Google carve up the Internet for themselves.

Here's a survey of prominent editorials that were written to prod Genachowski to get back in the front seat (alongside President Obama), salvage his reputation and champion public policy that protects the Internet's democratic nature against corporate overlords:

“This "Title II reclassification" ... doesn't require a permission slip from Congress. A simple majority vote of the FCC's five commissioners will do, and three of them have publicly argued for net-neutrality rules. ”

“The F.C.C. has been searching for a way to ensure an open Internet since April ... In May, the commission proposed to reclassify broadband as a telecommunications service, the right definition for this era. This process must be allowed to proceed.”

"But at the moment, the choice appears to be between having major industries self-regulate their Internet behavior, and having the FCC regulate it. Given that the Google-Verizon proposal seems helpful primarily to Google and Verizon at the expense of an open, innovation-friendly Internet, it’s time for the FCC to step in.”

"Although the Verizon-Google proposal looks all but dead for now, it's the latest example of how the Internet is under assault by those who would erect tollbooths on what is now a freeway. It is also clear evidence of how the FCC needs to set up clear rules to prevent Internet service providers and device makers from controlling what content people can access."

"The FCC has the power to change the situation, and this deal provides a catalyst. It can swiftly assert its authority to ensure open, nondiscriminatory high-speed Internet access for Americans for both wireless and wired services. We urge the commission to deliver on the president's promise. Don't let these giant galoots shaking hands in the corner distract you -- you have a job to do."

"Google's mission is doing evil by consolidating its already too-large share of the digital advertising market and picking up the scraps left behind by Verizon and other Internet service providers.It is time the FCC not worry about the interests of huge corporations and focus on good public policy instead. Kill the Google-Verizon scheme before it gains traction."

"...the Google-Verizon pact isn't even close. They need to go back to the drawing board and get support from consumer groups and Internet users instead of just broadband carriers and web giants. The FCC also needs to step in immediately, by reclassifying broadband under a section of the telecommunications code that's subject to more scrutiny - and therefore less ability to discriminate."

"Genachowski now faces a choice, and his legacy as chair rests on his decision," says Karr. "Will he be true to Internet users and restore the agency's power to protect an open and accessible Internet? Or will he buckle to pressure from the phone and cable companies and look the other way as they undermine the Internet's democratic nature?"

"The FCC must assert its regulatory prerogatives over broadband and seek clarifying authority where the rules need to be sorted out. The FCC is not an agent of the industries it oversees. President Obama and Chairman Genochowski need to remember whom they work for. The customers will not forget."

"This affects us all, and we all need to join together to stop it. We need everyone involved if we're going to stand up to corporations the size of Verizon and Google. This is the FCC's job right now, and their lack of strong enforcement is unacceptable. The free-flow of ideas and innovation online is in danger."

"...the vacuum we now have in regulating high-speed Internet access has led these companies to divide things up among themselves. The FCC is being disintermediated, in effect. The Commission needs to act quickly to protect entrepreneurs, innovation, and consumers."

"Given the possibility that Republicans could retake the House, it looks unlikely that Congress will take any action in support of neutrality for the next few years.Over at the FCC, Genachowski has been slow to act, and has said little on the Google/Verizon proposal. But net neutrality rules are now quite clearly up to him."

So, will the media deluge penetrate the eighth floor offices of the F.C.C chair? Will Genachowski proceed with his earlier pledge to restore the agency's authority, promote universal access and protect Net Neutrality? Or will he buckle to pressure from the phone and cable companies?

Either way, he is the swing vote for a majority of the commissioners. So the fate of the Internet -- as the most open and democratic media in history or as a closed network controlled by the few -- is now Genachowski's to determine.
Posted by Tim No comments: 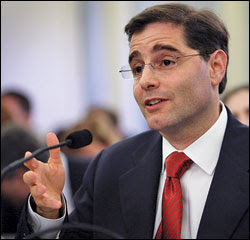 Net Neutrality is far from dead. This chairman just needs you to help him find his backbone so he can get back to work.
Posted by Tim No comments:

The Corporate Deal to Control Your Internet

--Originally published by The Seattle Times

Washington is under siege over Net Neutrality.

On the one side, elected officials and regulators have heard from millions of citizens demanding that Washington protect this rule that preserves the Internet’s open architecture.

On the other is a lobbying juggernaut that seeks to dismantle online openness so that phone and cable companies can rebuild the Internet as a gated community that serves their bottom line.

The problem is that policymakers in the middle aren’t holding the line for the public. They seem content simply to cut a deal between companies with the most political and economic clout.

If that doesn’t worry you, it should.

Because the deal they’re cutting is over who ultimately wins control of online information. And it goes without saying that you’re not in the running.

Google, Verizon, AT&T and others are reportedly nearing consensus on an agreement that could radically redesign the Web, allowing the carriers to build priority access lanes that admit only large companies that can pay the toll.

Where will that leave the rest of us? Stranded on the digital equivalent of a winding dirt road, with slower service, fewer choices and limited access.

Here’s the kicker. The FCC, the one agency tasked with protecting your interests online, may be poised to sign off on this plan. The agency is reportedly convening closed-door meetings with these companies to strike a deal that would let Internet providers implement a “paid prioritization” scheme.

According to the Washington Post, the FCC’s chief of staff wanted to "seize an opportunity" to agree on ways that carriers could “manage traffic” on their networks.

If recent articles by Amazon and AT&T execs are any indication, paid prioritization would allow carriers to ransom access to their customers to the highest bidder. AT&T’s top lobbyist, James Cicconi, wrote that such extortion was "not only necessary but in the best interest of consumers."

The beauty of the open Internet is that anyone with an idea has a chance to take on giant corporations without first having to bribe network owners for access. Net Neutrality is the rule that guarantees this openness.

It’s because of Net Neutrality that great ideas like YouTube (which began in an office above a pizzeria in San Mateo) and Twitter (which grew out of a day-long brainstorming session among podcasters) blossomed to revolutionize how we connect and communicate with one another.

The paid prioritization deal under consideration wouldn’t allow for the next YouTube. And the next Twitter would likely never make it off the drawing board.

This scheme would let companies like Comcast and AT&T favor their own video services, voice applications and social media. It would let Verizon build a wide moat around its Internet fiefdom, insulating itself from competition by upstart innovators that want to show consumers how things can be done better and more cheaply.

Columbia Law Professor (and Free Press board chairman) Tim Wu has said that letting carriers choose favorites is “just too close to the Tony Soprano vision of networking: Use your position to make threats and extract payments. This is similar to the outlawed, but still common, ‘payola’ schemes in the radio world.”

"If allowing network discrimination means being stuck with AT&T's long-term vision of the Internet,” Wu concludes, “it won't be worth it."

That the FCC would consider such a deal marks a reversal on Chairman Julius Genachowski’s earlier pledge to safeguard the open Internet.

As recently as May, Genachowski proposed to reclassify broadband access under “Title II” of the Communications Act. This move would reverse dangerous Bush-era deregulations and give the agency the authority to protect Internet users from abuse by carriers.

In a letter to the FCC, Rep. Jay Inslee (D-Wash.) Supported Genachowski’s plan to reclassify. Inslee gathered support for this move from more than 30 other members of Congress who told the FCC that reclassification is the way.

Rather than abandon it to cut secret deals with corporations, the Commission should use its power to protect Internet users and preserve the free flow of communications online.
Posted by Tim No comments: