Former Federal Communications Commissioner Michael Copps spoke Thursday about whether the media are strengthening our democracy -- or destroying it.

His assessment -- after serving for more than a decade overseeing the industry -- is disturbing. Copps has long argued that the media in general, and TV broadcasters in particular, need to do a lot more to nourish civic discourse.

Unfortunately, the owners of the nation's television stations don't see it that way.

"The public airwaves," Copps said in a speech at the University of Delaware, "have been hijacked by those whose primary objective is to serve the special interests rather than the public interest."

We can see this in 2012 in the relentless barrage of toxic political ads. It's also apparent in the dearth of serious local news to correct the misinformation and expose the money behind the ads.

Kathleen Hall-Jamieson claims to have found a "flaw in the logic" of a recent Free Press report on fact-checking by Denver TV stations. That report found that, despite a few notable exceptions, Denver stations weren't doing enough to investigate false claims made in political ads.

Free Press looked at ad spending in August and September by five prominent third-party groups. During that time, Denver's four biggest stations aired 29 hours of ads from these groups and devoted less than 11 minutes to related coverage. That's a ratio of 162 minutes of ads for every minute of news.

Worse, stations kept airing ads their own reporters found were false or misleading. But Jamieson suggests that such statistics don't matter because voters can get fact-checking information from other sources, including her own site, FactCheck.org.

In 2012, politics are all about spreading lies and making money.

And we're not talking nickels and dimes. Campaigns and Super PACs are raising billions of dollars to win over voters. A large chunk of that money ends up in the pockets of local broadcasters who are selling off the airwaves to place political ads. And way too many of these ads are dishonest.

If you're a television viewer in a battleground market that means having to endure a relentless stream of misinformation. Best estimates are that more than half a million political ads will air nationwide by Election Day.

And what are broadcasters giving viewers in return? Next to nothing. They have done virtually no fact-checking of the claims made in political ads.

The Internet as Political Lie Detector

In a year of misleading political attack ads and distracted television newscasters, the Internet may offer salvation for voters seeking the truth.

A new Google poll found that 64 percent of battleground-state voters have used the Internet to fact-check the candidates in 2012.

They may have gone online after tuning out local television news, which has largely taken a pass on vetting the claims made in political ads they air. Two recent Free Press studies found that newscasters at stations in the most heavily saturated markets have failed to investigate the shadowy groups that place local political ads — or to question the content of the ads themselves.

A Free Press’ study of political ads in Milwaukee found that stations in May devoted 53 news segments to Justin Bieber while offering zero analysis of the groups behind political ads flooding local airwaves.

Scared Silly ...or... Why Photography Matters 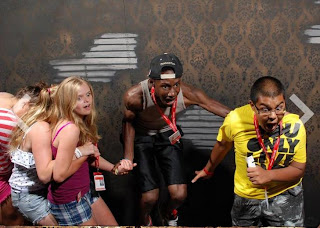 Every so often I come across a body of photographs that is so perfect in its simplicity and execution.

A recent series of  images by Nightmares Fear Factory in Niagara Falls depict people at a particularly terrifying moment during a walk through a haunted house.

These images are remarkably photographic in that they show people as they are, in playful moments of shock at some unseen -- and fake -- threat.

Their flash of a reaction reveals much about these people as individuals, and about human nature. Of special note is our shared and immediate tendency to seek the physical comfort of others when startled unexpectedly.

And they're just funny. Some favorites:

In Pyongyang: The Ride of Your Life

The parks, located on the outskirts of the city had fallen into disrepair during the rein of  Fearless Leader Kim Jong Il. Their cause was taken up by Jong Il's son and successor Kim Jong-un, who publicly reprimanded park management for poor maintenance during a visit in May.

Jong-un is not alone among Hermit Kingdom royalty in his love for theme parks. Half brother, Kim Jong-nam, had fallen from favor in 2001 after he was caught attempting to visit Tokyo Disneyland using a fake passport. Other reports claim that Jong Un himself had successfully duped Japanese authorities during an earlier visit to the theme park.

The Miami Herald's Edward Wasserman cites my reporting on political ad spending in a cutting  commentary on the state of local television news in 2012.

"The funders of political advertising appear to have purchased not just air time, but immunity from media scrutiny," writes Wasserman, who was recently named dean of the UC Berkeley Graduate School of Journalism.

"Some of the same media that should referee political discourse and oversee the process by which a sovereign electorate selects its leaders are in thrall to the backroom players whose mission it is to manipulate and game that discourse."

Wasserman refers to the findings in Left in the Dark and Money, News and Deception in Denver, two Free Press studies that ask whether the TV stations that are pocketing billions in political ad money are also reporting on the entities that bankroll those ads.

Big Bird Takes Back the Streets

Sales of Big Bird costumes are up this Halloween as many don yellow feathers to protest the GOP attack on public broadcasting. A sampling:

One Minute of News vs. 162 Minutes of Ads

Denver played host to the first presidential debate of 2012, but for TV viewers in the Rocky Mountain State, the political mudslinging has been going on for months, thanks in large part to the deluge of political ads from Super PACs and other third-party groups.

Since Aug. 1, these groups have joined with the official campaigns to buy time to air more than 26,000 political ads on the city's ABC, CBS, Fox and NBS affiliates.

The onslaught is wearing down many locals. "I have reduced drastically the amount of television I watch," Denver resident Larry Bahn said. "I have just about given up watching local news because the ads are almost continuous there."

Some Denver newscasts have tried to keep pace with the crush of political ads, examining their claims to separate fact from fiction.


An occasional live blogging of the Big Bird meme of 2012:

8:00 a.m., Friday -- Public broadcasting executives don't enjoying being in the spotlight after Gov. Mitt Romney's pledged to cut funding to PBS. “We would very much like to be out of the picture as soon as possible,” Patrick Butler of the Association of Public Television Stations told the New York Times. “We think there are more important issues for presidential candidates to talk about than our little funding issue here.”

8:00 a.m., Thursday -- Big Bird may have jumped the shark now that the Daily Show is mocking President Obama for overplaying Romney's debate-night comment. Host Jon Stewart lists a slate of Romney statements on other issues that should provide ammo to the Obama campaign, and slams them for picking a light-hearted Sesame Street ad as the focus of their post-debate spin. "You're going with the Big Bird buy, still!?" Stewart asks the president. The fear here is that very real concerns over the fate of public media are being eclipsed by Obama's mishandling of the issue. Perhaps the president should have clearly stated his full support for PBS funding and left it there. (See the Daily Show clip here).

4:00 p.m. -- The Big Bird meme appears to be on the wane, one week since Gov. Mitt Romney announced his intention to cut federal funding to PBS, home to Sesame Street. The chart above is just one indicator. It tracks one week of Google News searches on "Big Bird" beginning Wednesday morning, hours after the conclusion of the presidential debates.

11:00 a.m. -- Sesame Street has released a statement urging the Obama campaign to take down a political ad that uses Big Bird to mock Gov. Mitt Romney. "We have approved no campaign ads," the organization said in a release. "As is our general practice, [we] have requested that both campaigns remove Sesame Street characters and trademarks from their campaign materials.