This Prettty Much Says it All 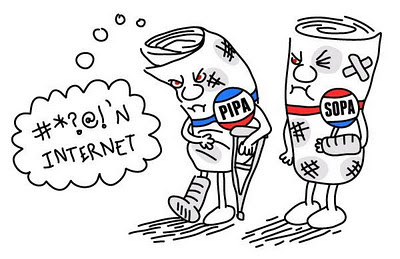 The Supreme Court's Citizens United decision has already picked a winner in the 2012 elections: TV broadcasters.

Companies like CBS Corp, News Corp. and Sinclair Broadcast Group are already dividing the spoils of an election year that will see unprecedented spending on political ads.

But that's just the first glimpse of an election year that will leave viewers awash in misinformation. All told TV broadcast companies stand to pocket more than $3 billion in political ad revenues by November. What they're not doing is letting viewers and voters in on the full story behind all this money and all these ads.

Why We Go Black

Wikipedia and Google blacked out? Redditers in an uproar? Thousands of geeks abandoning their cubicles to take to the streets?

Today's nationwide protest of Internet blacklist legislation is part of a brewing movement to keep control over the Internet out of the hands of corporations and governments. It's a struggle that puts Internet users before information gatekeepers. At stake is everyone's democratic right to information.

The movement owes its momentum to a recent sequence of events. Leading up to 2010 millions of Internet users became advocates in support of Net Neutrality protections. In 2011, the importance of digital freedom spilled out onto the streets as demonstrators with a mobile phones and a connection became a force in global protests.

If you flip on a local television station and watch for an hour or so, you're likely to see at least one: a political ad that attacks a local or national candidate.

If you live in any of the "battleground states," you'll see many, many more -- up to 12 political ads an hour.

Viewers in Iowa fell under a barrage of these ads leading up to Tuesday's caucuses. This on-air onslaught offers the rest of us a preview of what television viewing will be like as Election Day 2012 draws closer.

It's estimated that American television viewers will see such political ads aired more than 200,000 times by the first week in November. What we're far less likely to see is any explanation of who really sponsors these ads, what interests they represent and whether the content of the attacks is true.