Beyonce, Mariah and Usher Must Make Good for Libya 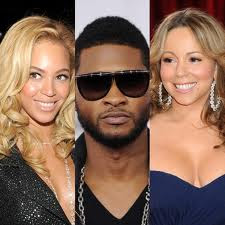 Beyonce, Mariah Carey and Usher pocketed millions in blood money from the Qaddafi family to perform at lavishly corrupt private parties on the Caribbean island of St. Barts.

According to a recent report in the New York Times, Mariah Carey was paid $1 million in 2009 to sing just four songs for Gaddafi's son Seif. One year later Usher and Beyonce received an equally large sum to sing at a New Year's party thrown by the family.

The Qaddafi’s have ransacked the Libyan treasury, making off with billions of dollars in oil money, while imposing a crackdown against any Libyan who speaks out against their corruption and brutality. Former music industry executive Howie Klein put it best: “For very, very wealthy American and British pop stars to take part in this kind of thing makes me want to puke."

If Beyonce, Mariah Carey and Usher have any sense of justice or decency, they should reject the Qaddafi payment and put the dirty money to work in service of a greater good.

There is no question: accepting stolen money from murderous dictators is morally repugnant. Keeping it after the Qaddafi’s engage in the slaughter of democracy protestors is downright unconscionable.

Retweet this Twitter petition to pressure Beyonce, Maria Carey and Usher to put their ill-gotten gains in service of a greater cause: to help relieve the suffering of the people of Libya.

A number of organizations are working to protect democracy movements across the Middle East. They could help save hundreds of lives with the sort of money that’s now sitting in the bank accounts of these three celebrities. (I have listed a few possible recipients below).

To salvage their reputations and make good on a horrible mistake, Beyonce, Maria Carey and Usher should do the same and donate Qaddafi's dirty cash to these well deserving institutions or others.


UPDATE 1: Earlier on Monday, pop singer Nelly Furtado Tweeted that she would be contributing to charity the $1 million she received from the Qaddafi family for a private performance in Italy in 2007. What say you, Beyonce, Mariah and Usher?

Arcade Fire agent David T. Viecelli adds, "Hopefully donate it to a charity that somehow assists some of the people who have suffered at the hands of that regime."

Denis Afra, the agent for Metallica, Billy Joel, and Rod Stewart, gave a bleak view of musicians who get paid for these types of private performances: "I don't think most artists go into [performing at a party like this] with that kind of in-depth focus, [of] how each country is governed and what goes on inside each country," he says. "Not every artist is a humanitarian. In more cases than not, for people, greed rules."

UPDATE 3 -- Beyonce Donates: Beyonce's publcisit told Associated Press on Wednesday that the singer gave her entire Qaddafi earnings to help support relief efforts in Haiti. According to the report Beyoncé was paid as much as $2m to perform her set, footage of which can be seen on YouTube. I have yet to find evidence to confirm this donation. Stay tuned.

UPDATE 4 -- Mariah to Donate: Mariah Carey just admitted she felt "horrible and embarrassed" about being paid $1 million to sing for the Qaddafis, She announced plans to donate the proceeds from a new song "Save the Day" to human rights causes and may even set up her own charitable foundation.

"Ultimately we as artists are to be held accountable," she said in a statement. Going forward, this is a lesson for all artists to learn from. We need to be more aware and take more responsibility regardless of who books our shows."

UPDATE 5 -- Usher to Donate: Usher announced on Friday that he would give away the money he received for his performance for Qaddafi's son in 2009. "I am sincerely troubled to learn about the circumstances surrounding the Nikki Beach St. Barts event that took place on New Year's Eve 2009," he said in a statement. "I will be donating all of my personal proceeds from that event to various human rights organizations."
Posted by Tim