It's the photographic non-narrative -- the sheen of sweat on the face of a barroom beauty (Eggleston), the menacing shadow that envelops a couple's hug (Goldin) -- that is a more meaningful aspect of photography, and, I would argue, of looking at the world.

North Korean officials in their efforts to present a facade to the outside world have made their country unintentionally and innately photogenic.

David Guttenfelder has been photographing North Korea for many years. And it has been a tug-of-war, between the images he wants to take and the story his official minders want his photographs to tell. It's the tension between these two poles that colors his work. 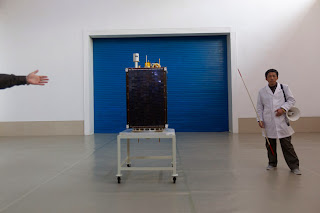 "The North Korean government, of course, works relentlessly to present a view of life in which schools are filled with happy, well-fed children, stores are filled with goods, and loyalty to the Kim family is universal," writes Tim Sullivan, an AP reporter who has worked alongside Guttenfelder in and around Pyongyang.

"It’s a country where reporting often feels like a series of strange, bloodless battles. Sometimes ... the government wins. But if you stay long enough and look deeply enough, there are days when you learn more than you expected. It’s why we keep coming back."

Guttenfelder's photographs offer this occasional glimpse behind the curtain.

Sometimes for Guttenfelder it's as simple as stepping back, to include the hand of a minder in a staged photograph of a North Korean satellite, or the partially obscured face of an official tour guide peering at the photographer from behind a column. 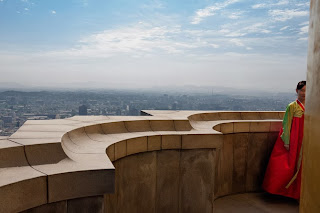 "Photography has never been successful at narrative," Museum of Modern Art photography curator John Sarkowski wrote more than 40 years ago:


"The photographer was tied to the facts of things, and it was his problem to force the facts to tell the truth. He could not, outside the studio, pose the truth, he could only record it as he found it, and it was found in nature in a fragmented and unexplained form—not as a story, but as scattered and suggestive clues.

The photographer could not assemble these clues into a coherent narrative, he could only isolate the fragment, document it, and by so doing claim for it some special significance, a meaning which went beyond simple description. The compelling clarity with which a photograph recorded the trivial suggested that the subject had never before been properly seen, that it was in fact perhaps not trivial, but filled with undiscovered meaning."