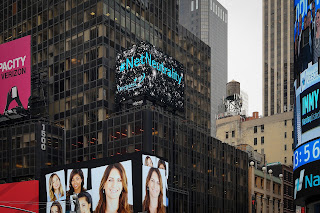 The open Internet flexed its political muscle in 2015, with millions of activists going online to demand Net Neutrality, protest an epidemic of hate crimes and celebrate equal marriage rights.

Free Press has brought this message of online power to Times Square, the world’s premier showcase for old media, placing a video spot on a 1,624 square-foot screen high above Broadway and 43rd Street.

The spot, running from July 1–Sept. 30, is a provocation to both media corporations and the millions of people who pass through this dynamic location.

Why Times Square? Long known as the “crossroads of the world,” Times Square has evolved in the last two decades from a seedy and abandoned stretch of pavement into a place where powerful corporations pump their brands via colossal advertising displays.

The five city blocks that encompass the intersections of Seventh Avenue, 43rd Street and Broadway host multi-story video screens featuring the logos of ABC, AT&T, CBS, Disney, Reuters, Verizon and their many subsidiaries.

It’s a Disneyfied streetscape that exalts in big-box commercialism. You can stand beneath ABC’s double-decker news zipper and stare across Broadway at MTV’s glass-box studio while being harassed for a selfie and a tip by a person dressed as Buzz Lightyear. The din of tourism and marketing has many native New Yorkers adding extra blocks to their commute just to avoid walking through Times Square.

But Times Square is also home to a proud tradition of protest. Occupy Wall Street activists often rallied here, seeing in its glittering corporate displays a symbol of the economic inequality that’s left too many people below the poverty line.

Last December protesters affiliated with the #BlackLivesMatter movement staged a “die-in” and blocked traffic in Times Square to protest the police brutality that’s led to the deaths of too many people of color.

During the late ’80s and early ’90s, I was project director at the Public Art Fund when we produced “Messages to the Public,” a series of artists’ “interventions” in Times Square advertising spaces. Artist Jenny Holzer took to 43rd Street’s Spectacolor screen with the message “PROTECT ME FROM WHAT I WANT,” which warned against the dangers of excessive consumerism. And anonymous artist collective the Guerrilla Girls used the screen to protest the sexism that underlies too much advertising.

The Free Press video heralds the Internet’s power as a tool for political organizing. It scrolls through a number of popular movement hashtags, including #Occupy, #BringBackOurGirls, #BlackLivesMatter and #NetNeutrality, before ending with the message: “Big companies don’t own the Internet. YOU DO. Fight for your rights to connect and communicate.”

If you’re in the city this summer, take a moment to visit Times Square and take in the scene. Snap a photo of our message and share it back to @freepress. 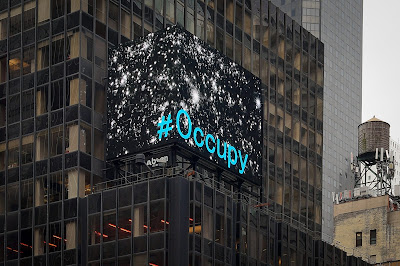 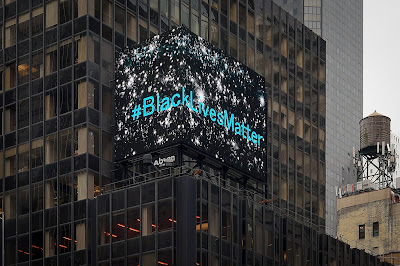 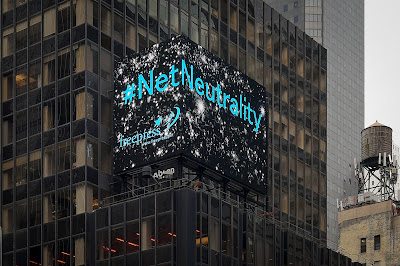 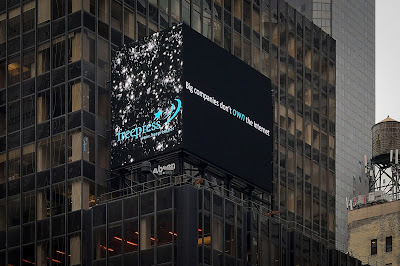 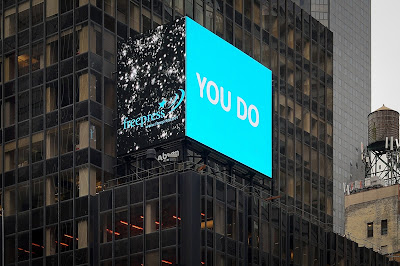 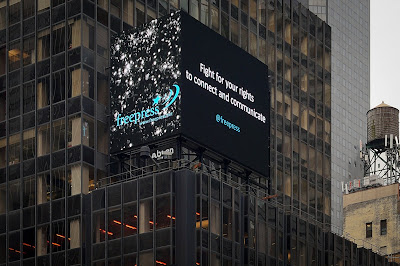 Like soap and cars, the Viet Nam war was sold using the same hypnotic media that Eisenhower and Macluhan warned us about. The medium is the message after all. The controllers know that the more the medium grows the less significant and dispersed their content becomes, which, of course, diminishes their power. Fast ubiquitous internet can end up democratizing society more than we expect, Greece and North Africa are good examples. Bernie Sanders and Elizabeth Warren's ideas are rising in popularity because of social media. When confronted with the irrational din of commercial and political propaganda, young minds seek knowledge and ideas that are Germain to our current historical moment.