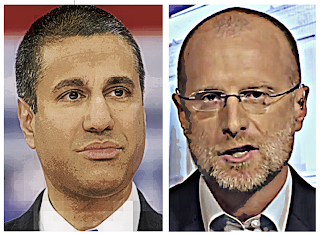 Donald Trump’s latest assault on the media’s free-speech rights comes in the form of a defamation lawsuit against a Wisconsin television station that ran liberal political ads that the president’s campaign didn’t like.

A Trump campaign spokesperson said they had “no other option than to use the force of law” to stop WJFW Channel-12 from airing the ads.
Donald Trump’s latest assault on the media’s free-speech rights comes in the form of a

But don’t hold your breath if you’re waiting for FCC Chairman Ajit Pai and Commissioner Brendan Carr to intervene on behalf of this local broadcaster’s rights.

It wouldn’t be the first time these Trump appointees have ducked their duty to defend the First Amendment against Trump’s unceasing attacks on the press.

The two have an on-again/off-again relationship with our essential free-speech rights. They play First-Amendment heroes when it suits their man in the White House, but become ghosts when they should be speaking out for free speech that doesn’t serve Trump’s selfish needs.

And we should know. Earlier this month, Pai and Carr wrapped themselves in the First Amendment to attack Free Press. Our alleged sin? We petitioned the agency to provide guidance to broadcasters on the FCC’s own broadcast-hoax rule as it pertains to the airing of COVID-19 misinformation that could cause public harm.

In denying our request, Pai and Carr mischaracterized it as a “brazen attempt to pressure broadcasters to squelch their coverage of a President that Free Press dislikes and silence other commentators with whom Free Press disagrees.”

In actuality, nowhere does the Free Press petition ask the agency to stop stations from airing misinformation. Nowhere do we ask the agency to censor broadcaster licensees. But these facts don't matter to Pai and Carr, who would much rather score political points than tell the truth.

The Trump FCC’s partisan approach to the First Amendment predates the pandemic. In October 2017, Chairman Pai went silent after Trump suggested that the FCC pull NBC broadcast licenses after the network aired coverage that he disagreed with.

After enduring a week of public criticism for foot-dragging, Pai — under whose authority licenses are challenged — issued a vague missive about “stand[ing] for the First Amendment” without specifically mentioning NBC or the president’s attack.

Earlier in 2017, Free Press sent Chairman Pai a letter detailing a series of incidents in which his federal agency and members of its security staff had silenced dissenting voices, roughed up a reporter and barred members of the public from attending the agency’s monthly “open meeting.”

“It’s beyond ironic that the government agency charged with promoting First-Amendment values is intent on violating them in the Trump era,” Free Press’ Jessica J. González said at the time.

The Trump administration has redefined the Fourth Estate as an “enemy of the American people” for the simple crime of doing its First Amendment-protected job of questioning his authority.

While Trump is attacking reporters on the front lines, his men at the FCC are quietly granting massive favors to any giant media company that toes the administration line.

Under Pai, the FCC voted to undo several longstanding media-ownership limits designed to prevent giant media corporations like Sinclair Broadcast Group from controlling too much of the public airwaves. Pai and Carr have also sought to destroy the cross-ownership rules that typically prohibit a single company from owning a newspaper, television and radio stations in the same broadcast area.

In a 2017 New York Times Op-Ed, Pai wrote that removing such ownership limits would clear the path for better local journalism. That’s true only if you consider a bigger Sinclair’s news product to be better, local or actual journalism. Recent evidence suggests otherwise.

To be clear, the First Amendment doesn’t distinguish between journalism and Sinclair-style propaganda. Among other things, the framers intended for it to guarantee that powerful officials can’t punish people who speak out against the government.

Trump’s attacks on the media violate both the letter and spirit of the amendment. But don’t expect any of Trump’s FCC appointees to say as much.

Want to Cancel SilverSingles Account? In case the cancellation request raised by you through the website is not processed, please contact the SilverSingles Customer care number.

When I thought about the way things have been recently, i owe my thanks to God for letting me find this amazing personality, i mailed Mr. alex roughly 2 months now, I was actually very uncertain about investing, very scared because i was also low on cash.I gave it my all, my first investment of $2,000 two weeks ago brought me $ 29,230 last week, and what intrigues me the most is the way him handles he partners, i recommend him too to my friend jeff, after trading with him, his testimonies have let me come here to attest for him. We are happy to meet a professional in you. I am proud to recommend him to any person who has a passion for trading, meet a good mentor and get good fortunes.Contact this veteran at: totalinvestmentcompany@gmail.com

In Tech To Review, you get the latest details about technology like a laptop, smartphones, PC, speakers and so on. We are here to tell you about the technology which is updated or upcoming with the trends. Today’s generation is keenly interested to know more about technology and here you can get everything in one place. Go to our website to know more.

For help and support to complete the activation, dial the customer support number +1-805-436-1200. Pick the top shows on this channel to start streaming.