It wasn’t supposed to be this way. Openness, user access and empowerment defined the first 30 years of popular Internet use. By design the network embraced decentralization; it spurned gatekeepers and amplified the voices of the many over the dictates of the few.

That meant Internet startups could take on industry incumbents with little more than an idea and a connection. The list of billionaire entrepreneurs who launched businesses from a dorm room or garage is too long to repeat. These success stories themselves have become clichés — a part of the lore of doing business in the 21st century.

The Internet has been a boon for political advocates, too. MoveOn.org is the creation of a husband and wife who in 1998 posted a simple Web petition protesting efforts to impeach President Clinton. They leveraged the Web’s network effect to grow into a political force that by the 2012 presidential election numbered more than 7 million people — and raised tens of millions of dollars in support of left-leaning candidates and causes.

The Internet has also organized to save itself. In 2011, nearly 17 million people participated in the online effort to kill Web-censoring copyright legislation that had been on a fast track for passage in both the House and Senate.

But now the Internet is entering a new era. Let’s call it the information counter-revolution.

The once democratic online world is giving way to a model where governments and powerful communications companies call the shots. In this new reality, Internet users have turned into data profiles and bargaining chips.

The surveillance news from Kiev is part of this counter-revolution. So is corporate-state collusion in government surveillance programs in the U.S. Last week’s court decision in Verizon vs. FCC is a part of it, too. The ruling stripped the FCC of the ability to protect Net Neutrality, the online principle that lets Internet users connect to anyone, anywhere, without having to ask permission.

In 2014, we’re experiencing a new age of “strategic data,” explains Ian Bremmer, president of the Eurasia Group, which earlier this month released its annual list of the top political risks worldwide.

For Bremmer, controlling strategic data is the latest push in an effort to manage all online information.

“It’s about states using data to engage in surveillance on their populations domestically and internationally.” It’s top-down, Bremmer says, and it’s not only about official use of personal data to protect national security. Governments and corporations are mining our data for more benign practices, too, like predicting traffic patterns or monitoring the spread of diseases.

Under this scenario, corporations that traffic in data are strategic partners with government. Silicon Valley and Washington are beginning to get a lot chummier. And phone companies like AT&T and Verizon have collaborated with the U.S. government for decades, a partnership that has grown more intense in the years since the Sept. 11 attacks.

A whole new surveillance industry has cropped up to provide governments with the tools to filter online content, break privacy-protecting encryption codes and aggregate and sort data on Internet users.

This private-public alignment is about more than sales.“Many sectors that used to be driven primarily by economics are now driven more by politics in many countries around the world,” says the Eurasia Group’s report. “By far the biggest change has been state involvement in the Internet and industries principally involved in the aggregation and sale of data, both for purposes of domestic and international security as well as to support strategic economic priorities.”

The Eurasia Group calls these developing relationships the “U.S. military-industrial-technological complex.” Others have called it the “surveillance state.”

Whatever the term, it’s a scenario where power over information is tilting away from rank-and-file Internet users toward the corporate and ruling elite.

In Verizon vs. FCC, Verizon argued that it has the First Amendment right to block and censor Internet users. In Verizon's view the Internet is like a newspaper, over which the phone giant serves as editor, publisher and marketer.

The court decision now enables Verizon and any other ISP to be the arbiters of all speech on the Web. And with their ability to collect mountains of user data, carriers also serve as a reliable resource for both advertisers and intelligence agencies.

AT&T, Verizon and Comcast had invested hundreds of millions of dollars in Beltway lobbyists, lawyers and public relations firms to win supporters of their new powers on Capitol Hill. The court’s decision means these ISPs have prevailed over yet another branch of government.

As advocates of online rights, we used to say that you have to “use the Internet to save the Internet.” This was an effective call to action when the network helped Internet users become better informed and more empowered in making demands of their governments. 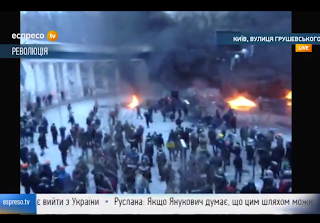 But the Internet counter-revolution is about empowering those who are already in power. It’s about turning our ability to connect and communicate against us — a dynamic that’s become all too real to those protesting today on the streets of Kiev.

Under the counter-revolution, using the Internet without first protecting yourself can be harmful.

To return to an open, people-centric network, we need a broader and more sustained Internet freedom movement — one that fights to protect our data as much as it does to restore Net Neutrality.

Staying silent — even when speaking out involves new risks — is no longer an option. Loud public pressure, both online and off, is the only way we can save the Internet.
Posted by Tim