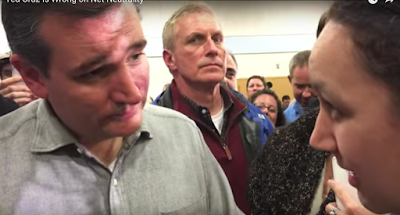 When facing questions about the Internet, Fiorina, who has an extensive albeit pot-holed history in Silicon Valley, routinely gets her answers wrong. And she's not alone. Across New Hampshire last weekend, candidates were blaming Net Neutrality protections for a hypochondriac's list of ailments.

"I think one of the things that will hurt the availability of the Internet is something the Obama administration has done this past year, which is to declare the Internet to be a Title II-regulated utility, which is going to end up driving up the cost and making the Internet more expensive," Sen. Ted Cruz told another audience member on Friday.


There's one problem with that argument. The lack of competition among Internet access providers -- not Net Neutrality -- is the reason why prices in the United States are so much higher than those in most other developed economies.

To his credit, FCC Chairman Tom Wheeler says boosting competition is a top priority. He has blamed a lack of choices for driving costs for broadband beyond the reach of many lower-income communities.

A recent Pew Research Center report shows that things are heading in the wrong direction. In the past two years, the percentage of adults with wired-line broadband at home has declined from 70 percent to 67 percent. Those declines were more pronounced among African Americans, rural residents and low-income families. This drop in connectivity is happening amid nearly unanimous political support for universal access.

If politicians could just agree on the problem, we could implement policies that would get more people connected at affordable prices.


"What bothers me a little bit about the regulation of the Internet is the Obama administration's rule and the FCC rule about using a [1934] law when we had a monopoly, we had Ma Bell," Gov. Jeb Bush said in response to an Internet-access question on Saturday. "They're using that same law to regulate access to the Internet. And I think that will stymie the investment in expanding broadband."

If the Net Neutrality rules were actually inhibiting investment that would indeed be a problem. But the country's largest providers are now spending more on broadband.

Earlier this month, Comcast reported that its fourth-quarter 2015 expenditures on its broadband business exceeded those of all previous quarters. And Comcast spent more in 2015 ($7.034 billion, up 14 percent over 2014's investments) on its cable-communications business than it had in any other year -- this despite the FCC's Net Neutrality ruling back in February 2015.

Last month, Time Warner Cable reported that its capital expenditures were up 9 percent in 2015 over 2014's numbers. Meanwhile AT&T's chief executive told investors that the company plans $22 billion in capital expenditures in 2016, which would be its highest-ever annual capital investment.


The candidates are making up stories about smaller providers, too. "You know what happened as a result of [the Net Neutrality rules]?" Fiorina responded to a question in New Hampshire. "A whole bunch of electric power co-ops have gone out of business. And they were getting ready to wire up rural communities and small businesses, their market niche."

No, they didn't, Ms. Fiorina. We checked and couldn't find a single instance where the new rules shuttered operations of an electricity co-op.

The Go-To Answer for the Misinformed

Why are candidates like Fiorina, Cruz and Bush getting this and other Internet issues so wrong?

Perhaps that's a question for a future campaign stop. (And the Free Press Action Fund plans to continue bird-dogging presidential candidates as the election year unfolds.) But blaming Net Neutrality protections, which millions of Internet users of every political persuasion support, is just a knee-jerk response from the misinformed.

And few candidates care to acknowledge the devastating effect the digital divide has on the lives of so many. Gov. John Kasich even had the gumption to claim on Friday that users are to blame for the high cost of Internet bills.

To be fair, not all candidates are getting Net Neutrality wrong. Both Secretary Hillary Clinton and Sen. Bernie Sanders support the FCC's rules.

And we haven't heard the last about Net Neutrality on or off the campaign trail. A federal appeals court is now weighing a challenge brought by Internet service providers that claim the FCC overstepped its authority (Free Press has intervened in court to defend the rules and vehemently disagrees with this view). A decision is expected in the coming months.

As issues like Internet access and openness play a bigger role in the 2016 race, the candidates need to get serious about ways to provide universal access to an open and affordable network.
Posted by Tim